Imlay in fine form as side overcome West Reading 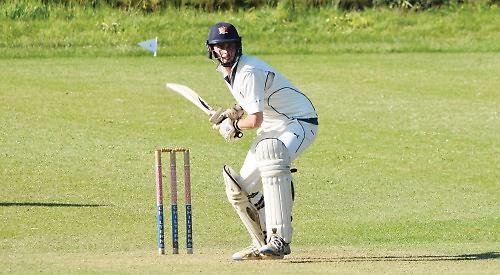 PEPPARD STOKE ROW captain Richard Ashton was philosophical after his side’s 329-day unbeaten run was halted in emphatic fashion as CHALFONT ST GILES cruised to an eight-wicket win in their Championship fixture on Saturday.

On a good batting track at Peppard Common, the hosts made a steady start with Andy Watts and Ashton putting on 37 until the latter was caught and bowled off a leading edge by Dan Heaney.

Watts and Brett Everett continued to look comfortable as Peppard Stoke Row motored along at a run rate in excess of five an over, but their momentum was halted when Everett (27) cut a long hop from Alex Heaney straight to point.

Chalfont captain Chris Cross then trapped Watts lbw, hastening the return of Sam Boughton to the crease on the back of a 20-month absence.

He blocked his first two balls before launching Heaney for a straight six which cleared Stoke Row Road, only to then mis-hit a full toss off Cross to mid on when on 17.

Dan Hayden (25) and Ben West (15) both got starts before chipping Cross to short cover, and the Peppard Stoke Row tail failed to wag as they were knocked over for 175 – spin twins Cross (5-38) and Heaney (4-42) the destroyers-in-chief.

Lancaster reached 53 before being caught by a diving Ashton at first slip, but this merely hastened the entrance of Chris Baumohl (45 not out), and he and Hardy (56 not out) hunted down the target in 45.1 overs.

Speaking after the game, Ashton said: “It’s been a long time coming, but finally we failed to find another Houdini act. It was one of those days – Brett got a long hop which he hit straight to point and Boughts and Olly have both mis-hit full tosses. Sometimes that happens, but we’ll go again against Penn and Tylers Green on Saturday and try and start another streak.”

Elsewhere in the division HARPSDEN dug deep to run out winners at home to WEST READING.

Visiting skipper Davidson won the toss and elected to bat on what appeared to be a flat looking track. Hancock and Birkett took the new ball and made early inroads as Birkett had Kamal caught in the covers early on.

Opener Kahn and Davidson fought back with a substantial partnership, making use of the true deck and lack of swing provided by the overhead conditions. Paice was brought into the attack early on and was rewarded for bowling tightly as Davidson miscued a shot to mid on for a well made 23.

Kahn continued to construct his innings, gradually accelerating to 35 before playing on to Birkett. New man Sohail then began to take the initiative, putting away any wayward bowling with efficiency and going past 50 in quick time. He fell to a casual catch from Dawson for 55 off the bowling of Franklin.

Dawson then came on to bowl himself and immediately found the swing and bounce that had evaded the rest of the bowling attack. He was rewarded with the wickets of Tariq (22) and Raja, both batsmen being foxed by an in-swinging Yorker from the Harpsden debutant.

The returning Hancock then removed Sarwar (20) and Razaq (16) to leave Harpsden in the hunt for maximum bowling points. Birkett then came back on for a final spell and teamed up with Hancock, removing Iqbal and Choudhry to bowl out West Reading in the 47th over for 207.

The Harpsden innings started off with a wicket for West Reading opener Razaq, who found the edge of Eslick’s bat with a late away swinger. Hancock played a cover drive to his first ball to the opener but was to be returning to the pavilion soon after as he was bowled by Tariq for 8.

Captain Whittaker joined Imlay at the crease and the pair began to pull the game away from West Reading, Imlay playing a number of well timed clips off his legs and Whittaker punishing any loose bowling that came his way.

When Whittaker was caught off Kahn Stevens arrived at the crease and played with trademark calm, rotating the strike and playing second fiddle to his partner Imlay. The opener passed 50 and the pair moved the score along at a good rate until Imlay was caught attempting to clear the infield for 74.

Stevens was then faced with a procession of partners as Shortis (13) and Franklin (14) came and went without seeing the game home. It was left to the experienced pair of Stevens and Dawson to see Harpsden win by three wickets in the 47th over, Stevens playing the finishing role with a very useful 39 not out.