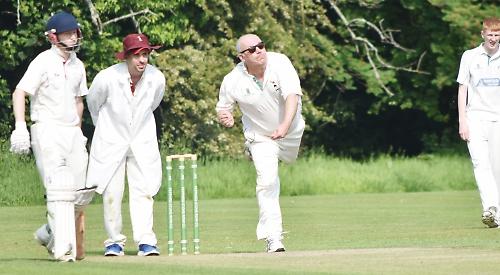 The visitors chose to bowl first in order to take advantage of the damp ground conditions.

A total of 166-7 was below par for the home side thanks to consistent bowling from the Checkendon attack in which skipper Vikas Chib stood out, taking 3-41 in 12 overs. Andy Johnson top scored for Mortimer West End, hitting 44 at a run a ball while there were three catches and a stumping for keeper Ujwal Tikoo.

A second wicket stand of 94 between Jim Warren and Shiva Aruna put Checkendon in a strong position which they almost contrived to waste by losing six wickets for 29 runs.

A spirited display from home captain Nick Kingston, who finished with 4-38, put the visitors on edge but an assured 16 not out from Amal Tyagi saw them home with three wickets to spare and five overs remaining.

Elsewhere in the division Ollie Carrier hit his second successive century as he top scored with 120 as GORING had the better of their home draw with FARLEY HILL. Batting first Goring put on 245-4 while in reply Farley Hill held on at 128-9.

Opener Don Townsin made a debonair 61 as PEPPARD STOKE ROW 2nds earned a winning draw against EARLEY in Division 1 of the Berkshire League.

Stand-in captain Matt Hogman lost the toss as Peppard Stoke Row were asked to bat, but Townsin and Gerry Bacon set a steady base until the later was caught by Dave Mapes off the bowling of Sean Vis. Matt Ravden and Chris Proudfoot provided useful knocks before youngster Sam Kimber made 31 — including a six which travelled more than 100 metres — only for the teenager to run himself out with a half century seemingly at his mercy.

Townsin eventually fell but with Roy Hayden and Chris Lee chipping in, Peppard Stoke Row closed their 45 overs on 181-5.

Despite Hogman trapping Owen Bye lbw early on, Gary Shacklady (39) and Vinod Aduri (45) appeared to have their side in cruise control before Ravden (3-18) and Hayden (3-35) turned the game on its head.

Proudfoot took a wicket in a spell of 1-9 from four overs, but Earley survived the final five overs to close on 138-9.

Mick Chard senior showed he is still a force to be contended with as PEPPARD STOKE ROW 3rds lost by 74 runs at WARFIELD in Division 3.