Walton and Taylor help side gain first win of campaign 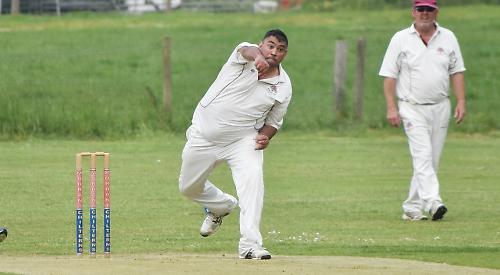 HURLEY edged out local rivals PINKNEYS GREEN in their Premier Division clash by 32 runs in a nail biting encounter as Jack Stemp launched an improbable counter attack to give the home side a real opportunity to overhaul the visitors’ useful 212-7.

Hurley’s Naeem Akhtar carried his bat to the 44th over to underpin the visitors’ innings despite the privations of Ramadan on a hot humid afternoon. Akhtar and Dave Simoes added 51 in 16 overs before Simoes was stumped as the ball rebounded from the keeper’s pads.

Imran Arshad prodded tamely to short cover before Vik Bhagwani joined Akhtar to add a further 51 for the third wicket. Hurley maintained a run rate of four an over with Shabob Riaz hitting a full toss to long on. Akhtar hit two sixes before Greg Double and Phil Ridgeway scrambled 13 from the final nine balls.

Hurley struck early to reduce Pinkneys to 14-3 from nine overs. Akhtar struck twice in the ninth over trapping Duderidge lbw and bowling Hayes after Arshad had removed Patel to long off where Joe Graham pouched the first of his three catches. Ben Purchase chipped Shabob Riaz for a patient 23 to reduce Pinkneys Green to 45-4.

Dhillon was called for an ambitious single but Simoes retrieved the ball to throw down the stumps at the far end to leave the hosts on
54-5.

It was then that Stemp and Uday Tikoo shifted the balance back with a 73 run partnership in 16 overs as the Hurley fielding spilled two key catches and the ball found the boundary with regularity. Tikoo was finally stumped by Simoes with Pinkneys needing 85 from the last nine overs. With the run rate climbing Feasey slapped to mid-wicket where Henry Graham took the catch. Stemp finally fell with the score on 170 going for another big shot as a battered Bhagwani had him caught in the deep again to Joe Graham. Victory was secured in the 42nd over as Ahmed hit Arshad to the hands of Graham.

The first league meeting between HURLEY 2nds and EMMBROOK AND BEARWOOD 2nds saw the hosts prevail at Shepherds Lane in Division 3.

Midweek rain had left a damp and slightly green track and Steve Taylor had no hesitation in asking the visitors to bat first.

The Hurley opening attack of Alex Williams and Nally Fernando kept a check on the scoring rate as Fairhead and Thorne struggled with the odd delivery popping on the damp surface. Fernando stuck with three wickets in five deliveries to reduce the visitors to 26-3.

Thorne was the first to go, bowled by a full length delivery. His replacement Sandeep Nair edged behind without scoring and Finlay Hunt was bowled off his pads from the next delivery. Joe Smart came in to face the hat-trick ball which he confidently drove down the ground for a couple of runs.

Smart and Fairhead staged a recovery with a partnership of 56 for the fourth wicket, helped by some poor fielding by the Hurley side who managed to put down at least a dozen chances.

It was Gul who had the last word when smart got a bit too overambitious, advancing down the track to be stumped by Mike Walton to give Gul his first league wicket.

A fine display of fielding from Alex Williams saw Sharp and Alex McNabb run out by direct hits off consecutive deliveries (128-7). A late flurry from Paul Hunsdon and Ian Narraway helped Emmbrook to a competitive score of 185 before the innings was wrapped up with a run out from Fernando and a wicket apiece for Liam Cole and Taylor.

The Hurley reply got off to a flying start with 16 runs coming from Hunt’s first and only over. Two boundaries off the next over saw Hurley on 24 off two. Things calmed down as Jonny Sharp and Sandeep Nair settled into a rhythm. The opening partnership reached 63 from 14 overs.

A change of bowling did the trick for Emmbrook with Hunsdon replacing Nair at the Shepherds Lane end. Yasir Gul tried to pull the first delivery from the new bowler and only succeeded in top edging to the keeper.

Fernando joined Ali in the middle and the pairing added a useful 81 for the second wicket. Quick singles were not much in evidence but some lusty blows from both batsmen helped keep the run chase on target.

By the time Ali and Fernando departed there were only another 36 runs needed for victory and with Taylor at the wicket, ably assisted by Matthew Williams, there didn’t appear any cause for concern.

Nair returned to the attack to bowl Williams and then have Mike Cole caught behind two deliveries later. With another 16 still needed Mike Walton joined Taylor and the duo saw their team home with 28 deliveries to spare.