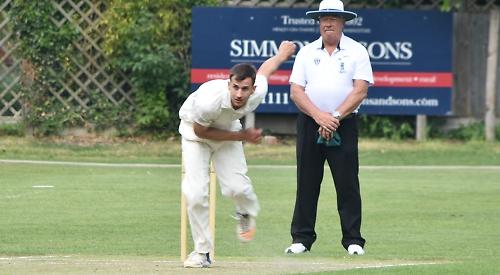 HENLEY 2nds suffered a narrow six-run Division 1 defeat against READING at the Brakspear Ground on Saturday.

The hosts won the toss and put their local rivals into bat first. Reading went on to bat out all their 50 overs as they put on 236-9 with Simon Wheeler taking 5-25 for the visitors.

In response Henley looked set to complete a successful run chase as they put on 118-2. However, four wickets fell in quick succession and the hosts found themselves on 123-6. Top scorer Zac Jones (54) fell with the score on 197-7. Number eight batsman Charlie Homewood hit a quickfire 46 from 59 balls but eventually ran out of partners as Henley were bowled out for 230 with three overs remaining.

KIDMORE END ran out winners by two wickets in their Division 2A clash at MAIDENHEAD AND BRAY.

Kidmore End won the toss and elected to bowl. Seamers Jeff Sheldon and James Frost bowled their allocation of 10 overs each, without break, in stifling conditions, both picking up a wicket each.

Left arm spinner Alex Crawford was brought on to bowl to replace Frost and young seamer Jake Elliot to replace Sheldon. At the half way stage the hosts had lost three wickets with Phillips-Williams holding the innings together and he went on to score 56 not out.

Guy Ashby bowled in tandem with Crawford for a short time and the pair ground the hosts’ run rate to a near standstill for six overs. Crawford collected three wickets for his efforts, helped by fielders Burningham at slip and Leonard as keeper. Leonard also snared a couple of stumpings, including a quick piece of work off the bowling of Faroqi in the second half of the innings, bowled one of his finest spells for the club as he took 4-29. Maidenhead and Bray were all out for 154 in the 50th over.

In reply Burslem and Easton started the innings well on the drying pitch as they moved the score past 25 quickly before wickets began to fall. Burslem was caught mistiming a cut shot, Easton caught on the boundary, Leonard trapped lbw, Ashby run out and Burningham stumped trying to attack one of the spinners as Kidmore were on 70-5 in the 17th over.

Frost and Crawford got the score moving again, mainly due to Crawford’s sweeping of the ball while Frost grafted at the other end. Crawford was bowled by a Yorker, and this brought Faroqi to the wicket, and he did not last long as he was caught by a catch at short cover.

Bodeker came in at eight with 60 runs still needed. Bodeker and Frost battled away with the run rate at less than two an over needed but they had to protect their wickets. Both batsmen rode their luck, surviving some close calls, but they stuck together and by the 44th over had managed to get the team within six of winning when a ball bounced alarmingly, taking Bodeker’s edge, then striking him on the helmet to result in a catch.

Jeff Sheldon joined Frost at the wicket nad the latter (36 not out) cut a boundary to help his team win with four overs to spare.

WARGRAVE overcame hosts WOKINGHAM 2nds to claim a 91 run Division 2B win. Batting first on a slow wicket, Wargrave scored freely, Will Allum (49) getting the team off to a strong start with some good shots and club returnee Imran Malik (31), Michael Cowdell (20), and Neal Robinson (49) maintaining momentum in the middle overs.

Some poor shot selection resulted in Wargrave falling away towards the end of the innings but they were still able to post a competitive 221 all out in 48.3 overs.

In reply Wokingham struggled to sustain any form of response. All six Wargrave bowlers bowled miserly and took wickets at regular intervals, with spin twins Neal Robinson (3-33) and Mark Firth (2-32) bowling the hosts out for 130 in 38.4 overs.

In Division 4A HENLEY 3rds went down to a two wicket defeat at READING 2nds. Batting first Henley put on 181-9 with A Hester top scoring with 41. In reply Reading put on 182-8 to win the match with Andy Chappell returning best bowling figures for the visitors of 3-35.

WARGRAVE 2nds maintained their 100 per cent record in Division 5B with a 64 run victory over a strong EVERSLEY 2nds side. Put into bat, openers Luke Taylor (37) and Kieran Lall (14) got Wargrave got off to a steady start, but after losing their first wicket on 44, found it difficult to sustain partnerships and lost batsmen at regular intervals. Jonathan Colbourne was bowled from a ball bouncing high from his thigh pad and spinning back onto the stumps while Huw Thomas was run out.

Wargrave were teetering at 114-7 after 30 overs, but good batting by Wargrave’s high quality lower order, including 45 not out from Kyle Bradley, ensured that they reached a respectable total of 211-9 from their 45 overs.

Captain Townson’s decision to hold back leading wicket taker Aryl Arppovoo and open the bowling with Jonny Rimmer and Charlie Moss seemed questionable as Eversley closed in on 50 for the loss of only one wicket, with number three batsman J Tucker looking dangerous.

Both opening bowlers bowled with venom and accuracy on the good Wargrave batting track and kept the run rate low. The introduction of leg spinner Martin Smith resulted in a wicket in his first over and the wily Smith maintained the pressure at one end while Arppovoo (9.5-1-42-4) mopped up the middle order with his third four wicket haul of the season. Eversley were bowled out for 147 in the 39th over with Rimmer coming back to take the last wicket.

Jake Leach’s 75-run innings was not enough for KIDMORE END 2nds as they went down to a nine wicket Division 7A defeat at home to FLEET 2nds.

The Gallowstree Common side were dismissed for 198 with the visitors easing to 201-1 to win the match.

Berkshire ladies’ off spinner Emma Walker took a match-winning six wickets (10-2-22-6) for WARGRAVE 3rds to all but guarantee a comfortable win over SONNING 3rds in Division 8A.

In partnership with her younger brother and fellow off spinner Tom Walker (34-2), Emma strolled through Sonning’s batting line-up to bowl them out for 131.

KIDMORE END 3rds picked up a 10-wicket Division 9A win at home to WINDSOR 3rds. Batting first the visitors put on 171-8. In reply Stefan Gordon hit a majestic innings of 134 not out as Kidmore End put on 172 without loss.