Reigning champions have work to do following back-to-back defeats 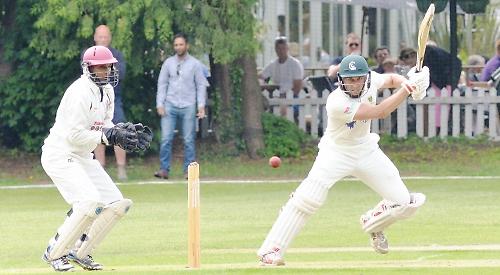 HENLEY’S second successive loss of the season at OXFORD last Saturday leaves the defending Home Counties Premier League champions with work to do.

Attempting to bounce back from last week’s loss to Aston Rowant, Henley again found themselves on the wrong side of a closely fought contest at Oxford, in which the home side’s Mohammed Ayub scored 108 to chase down the visitors’ 216.

Despite having set a par score on a wicket which was not easy to bat on, Henley’s ill-discipline with the ball, some missed chances in the field and the ineffectiveness of the away side’s normally reliable spin-quartet allowed Oxford a chance to seize the day.

Overcast and wet conditions met both sides at the John Hill Sports Ground, the temporary home to Oxford CC. Common sense prevailed and as the clouds slowly lifted, the toss quickly ensued and having won it, Henley elected to bat.

This decision looked to have perhaps been the wrong one initially, as three quick wickets fell for only 19 runs. Rowe was the first to go, missing a swinging ball to be bowled for a golden duck, before Woods followed the very next delivery, caught softly at midwicket off the erratic yet seemingly effective bowling of Simon. Having safely negotiated the hat-trick ball, the in-form Morris soon went to work and briefly with Roberts, the pair appeared to have quelled Oxford’s early successes. Skipper Roberts soon departed, being caught and bowled again off Simon, which meant Rishton entered the fray earlier than he would have anticipated. Both he and Morris combined nicely and began rebuilding the Henley innings. Combining staunch defence with some attacking intent when the opportunity allowed, both batters demonstrated that with some application and patience, a big total was potentially on the cards. The pair passed the 100 stand with relative ease and looked set to make match-defining contributions.

However on 47, Rishton fell softly, caught at mid-wicket, before Morris was caught at cover just one run later off the bowling of Humphries, also in a soft manner.

The disappointing nature of the dismissals from all five top-order batters will need to be rectified if such collapses are to be avoided going forward. Nonetheless Barnes and Williams began rebuilding again and both were able to rotate the strike effectively, with Barnes hitting some useful boundaries off the spinners. Unfortunately Barnes was then dismissed in similar fashion to Morris, and with only Brock combining with the ever-developing Williams towards the end, the away side stumbled to 216 all out off 49.5 overs.

Although not reaching the ideal total, Henley would have been confident of defending what was set. However in order to defend this, their skills in both the bowling and fielding departments would need to be on the money.

Nugent struck early, having Eltham caught by Woods at mid-off, before Dickinson and Tong-Jones combined to build a steady second-wicket partnership. Afridi was too good for the latter, bowling him with a ball which would have got many players out, before Rishton struck twice in quick succession to have Dickinson (bowled) and Perkins (lbw) on their way back to the hutch with the score on 45-4.

At this stage, Henley looked set to charge through Oxford’s middle order. However Ayub illustrated just what an important player he is for Oxford, playing the spin masterly and not allowing anyone to settle. He was joined by young Nutt who helped to resolutely hold up an end whilst Ayub plied his craft.

The pair put on 146 before Nutt was caught at cover by Roberts off Afridi for 40. From this point, Oxford only required 27 and despite losing a further two wickets, were always in the driving seat and passed Henley’s total with an over to spare.

Although not an ideal start to the season, with two defeats on the bounce, skipper Roberts remains upbeat before his side’s next game. Roberts said: “Again we were 6/10 with our skills today: soft dismissals, a key dropped catch and a few run outs not taken, whilst too many extras and bad balls meant we struggled to build pressure.

“Having said this however, our fight and attitude were again exactly where they needed to be today, and if we can get our skills firing on all cylinders, we will be able to put in much improved performances. The hard work will be done in training this week for sure.”