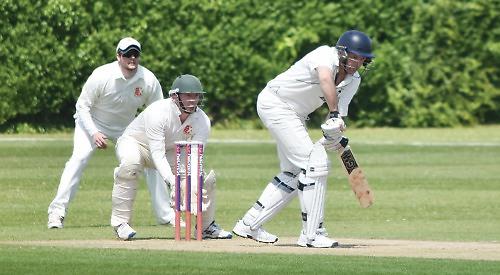 THE Lord’s dream remains alive for PEPPARD STOKE ROW as they caused an upset by beating hosts WARGRAVE by 139 runs in the semi-final of the Berkshire section of the National Village Cup on Sunday.

The visitors lost the toss and were in immediate trouble as openers Andy Watts and Tom Wright fell cheaply.

Brett Everett and Ashley Hayden both played well to put the visitors in a respectable position, but after the duo departed amidst the demise of Dan Hayden, Peppard Stoke Row were 108-5 and wobbling.

A mature innings from club captain Olly Nicholson (33), aided and abetted by Richard Ashton’s 52 and a match-turning quick-fire 49 from Max Baker-Smith, helped the visitors progress their total, and they ended on an impressive 263-8 from 40 overs.

Satheech Elaganathan grabbed the key wicket of Wargrave captain Sam Bowers in his opening over, the opener hitting a four and six before edging to Ashton at first slip, and the bowler then removed Matt Clark first ball. When Nicholson bowled Sam Warren, Wargrave were 18-3.

Jacob Clark (56) led some resistance with a hard-hitting innings, but when he was caught by Ashley Hayden at deep mid-wicket off the bowling of Baker-Smith, the writing was on the wall for Wargrave.

The younger Hayden transformed his fielding escapades into his bowling as he claimed remarkable figures of 4-2 from 3.4 overs, and Wargrave were eventually dismissed for 124.

Peppard Stoke Row now take on Thames Valley League Division 1 leaders Cookham Dean in the final of the Berkshire section on Sunday, and captain Ashton is looking forward to the challenge.

He said: “To have the chance to take on Cookham is amazing – they were a Home Counties side two years ago and we go there as a proper village side in a county final. It shows the magic of this cup.

“To beat Wargrave was a big surprise but again I have to pay tribute to Dion, Maxy, Ash and JP – these spinners can bowl, and if we were to shock the world one more time at Cookham, I don’t think the side could be in control come Sunday night.”