Carrier helps side to first derby win for dozen years 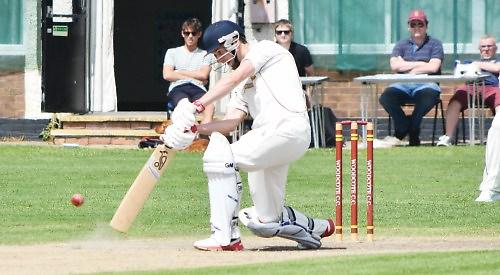 CHECKENDON moved to the top of the Premier Division having had the better of a draw at home to IBIS MAPLEDURHAM last Saturday.

The hosts defied the rain-affected conditions by hitting 196 all out in 43.4 overs. A second-wicket partnership of 117 between Ujwal Tikoo and Shiva Aruna was decisive thanks to good judgment in the face of testing bowling from the visitors. Chad Cudjoe finished with 6-14 off his skidding medium pace. Aruna also joined a select few to have hit a straight six into the neighbouring builders’ yard.

The Ibis reply depended as usual on the stylish Dave Druz who made 32 before falling victim to Vikas Chib. Thereafter the visitors fell back on defence and even three wickets in one over for paceman Amal Tyagi could not give Checkendon the final breakthrough.

Lewis Heart faced 26 balls without being tempted into a scoring shot as the game ended as a draw.

WOODCOTE took a hammering in their derby clash against visitors GORING as they lost out by 118 runs.

Home captain James Worsfold decided to field first but, despite his own three-wicket haul and some tidy bowling from Pete Roberts and Ryan Van Heerden, Goring passed the 200 mark with several good innings, the best by the free-scoring Ollie Carrier. The Woodcote innings was a disaster with only Jez Mayo putting up any real resistance, carrying his bat through an innings in which he needed a runner throughout after a fielding innings.

All the Goring bowlers bowled well with Dabra and Slade claiming three wickets apiece as the hosts were bowled out for 89 runs as the visitors picked up their first derby league win for 12 years.

Ravden’s fellow Abingdon School student Dan Bacon, 17, batted well to top score with 34 in reply, but Peppard Stoke Row’s middle order was blown away and despite some stoic resistance from Ravden and another teenager, Alfie Burnett, they were eventually bowled out for 147 with just two overs left to try and salvage a draw.

Matt Vines enjoyed a dream return to league cricket as his 4-13 fired PEPPARD STOKE ROW 3rds to a first Division 2 victory of the season in a seven-wicket triumph at WOKINGHAM 6ths.

U15 Owen Simmons also chipped in with figures of 2-24 from 10 overs as the home side were bowled out for 122 – a total which could have been lower but for Andy Watts throwing a catch over the boundary for six when number 11 Krishan Fernando hit it to him at deep square leg.

Peppard Stoke Row lost a couple of wickets early on but James Hern (49 not out) on seasonal debut, Mark Lambert (41 not out) and Rob Simmons (20) ensured they reached their target without fuss from 32.2 overs.