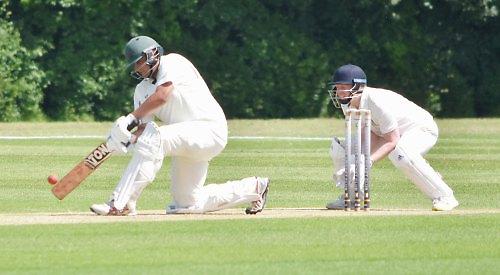 HENLEY 2nds suffered their second Division 1 match of the season at COVE on Saturday.

Having won the toss Henley put the hosts into bat first and bowled then out for 207 with Gurveer Singh taking 5-28 for the visitors while Nick Johnson and Cameron Jacobson both chipped with two wickets each.

In reply Henley found scoring runs hard to come by with only four players making double figures as they were bowled out for 114 with Jacobson and Zac Jones both top scoring with 21 runs each.

KIDMORE END ran out 107-run winners in their Division 2A clash with EVERSLEY at Gallowstree Common.

Having lost the toss Kidmore End were put into bat on a slow, soft pitch. The conditions were challenging as the ball, although consistent in its bounce, was not reaching the batsmen at a comfortable height or pace for stroke play.

The opening pair of Burlsem and Easton got the hosts off to a good start — 46 runs on the board in relatively quick time, during this partnership both batsmen struck sixes. Easton pulled a long hop for six and Burslem launched and lost a ball with a mighty blow off a no-ball free hit. Soon after he was well caught for 17 as was the number three, Burmigham, who started brightly before he too was caught.

Ashby and Leonard never got into their strides as they both fell cheaply as Kidmore found themselves on 113-5.

Frost batted with virtuous patience and ugly leg side swipes. The eighth wicket partnership of 26, the second highest of the Kidmore innings, in the last 10 overs between veterans Frost and Sheldon, featured a number of quick singles and helped the team up to 190. After they were split up the side manged to limp to 193-9. The top scorer was extras, with 51 and Frost a distant second top scorer 30 not out.

Kidmore’s first over was not great as a no ball free hit was smashed to the boundary and there were five penalty runs as the ball struck a helmet on the field of play, thanks to an error by keeper Leonard. This did not perturb the young vice-captain as he took a stunning legside catch when up to the stumps off the bowling of Sheldon to remove Eversley’s leading batsman Howarth, first ball.

This started a collapse as Frost struck the next over picking up an lbw before Jeff Sheldon took up the mantle. The experienced Sheldon nearly took a hat-trick as the batsmen had no answer to his leg cutter, he struck two batsmen in front of the stumps lbw and took another wicket with a leg cutter that resulted in a leading edge and a catch at mid on by Ashby. Howarth, Soames, Niblett and Hickman were all gone for ducks with Eversley on 16-5.

The skipper changed the bowling early, realising the wicket suited the spin bowlers and cutters, introducing Alex Crawford to the attack and he took a wicket almost immediately.

There was a brief fightback as Magowan and Davidson smashed quick 20s exploiting the attacking fields set. Thanks to a good catch by Crawford on the boundary off of Frost and accurate spin bowling from Crawford and Ashby, the game was wound up pretty quickly. The pick of the bowlers was Jeff Sheldon, who took four wickets and removed the top order. Crawford bowled well for his three wickets, with Frost, two, and Ashby, one, sharing the remains between them. Eversley were all out for 86 in 20.5 overs and Kidmore won by 107 runs.

WARGRAVE stormed to victory against visitors BEACONSFIELD, beating them by 126 runs to continue their good form in Division 2B.

Batting first Wargrave lost Will Allum before a run was on the board, but Mandip Sohi quickly wrestled the initiative back scoring a quick-fire 46. Imran Malik (91) and Neal Robinson (77) batted steadily in the middle overs, and an increase in tempo from both players at the end ensured that Wargrave finished with 274-6 from their 50 overs. Hamish Smart took 4-55 but 49 extras was a major hindrance to the otherwise decent all-round bowling performance.

Beaconsfield’s batting never looked confident in their reply with Mandip Sohi and Jack Clark picking up the first two wickets and keeping things tight in the early overs. Mark Firth bowled well taking 4-35 while Neal Robinson picked up 3-22. Todd Merchant top scored for Beaconsfield in their total of 148 all out.

Division 4A basement side HENLEY 3rds are still looking for their first win of the season after they went down to a narrow four-run defeat against BAGSHOT 2nds at Nettlebed.

Having won the toss Henley put Bagshot into bat and restricted them to 232-9 from their allotted overs with Alex Johnson and John Neville both taking three wickets each.

In reply Henley kept up with the run rate but lost wickets regularly before eventually ending their innings on 228-0.

In Division 5B WARGRAVE 2nds lost by 34 runs at FALKLAND 3rds. On a difficult batting surface Falkland scrambled to 145 in 34.5 overs with S Hack reaching 33 and extras top scoring with 35. Arul Appavoo was again the pick of the bowlers for Wargrave, taking 5-26, backed up well by Jonny Rimmer (2-39) and Huw Thomas (2-23).

In reply Wargrave were bowled out for 111 with Kam Hanif (34) the only batsman to provide any form of effective resistance, and opening bowlers S Sharma (3-25) and Gajan (5-28) the wicket-taking heroes for Falkland.

KIDMORE END 2nds slipped to second from bottom in Division 7A after losing by 37 runs at ROYAL ASCOT 3rds.

Having won the toss Kidmore put the hosts into bat first and Royal Ascot went on to score 239-7 with A|zhar Udeen taking 3-44.

In reply Duncan Grant top scored with 73 but wickets fell at regular intervals as the visitors were bowled out for 202.

In an exciting game in Division 8A, WARGRAVE 3rds beat visitors ROYAL ASCOT 4ths by 68 runs to continue their 100 per cent record.

After a shaky start losing four early wickets, Wargrave recovered well to reach 182-9 from their 40 overs with Alex Hands (33) and Michael Hattey (53) scoring the bulk of the runs and Naeem Mohammed taking 3-49.

In reply, Royal Ascot could only reach 114 all out with Tom Walker bowling well again, taking 3-19, and backed up by two wickets apiece from brothers Andrew and Christopher Hattey.

KIDMORE END 3rds ran out winners by three wickets at EVERSLEY 4ths in their Division 9A clash.

The hosts won the toss and elected to bat first and were bowled out for 133 with Don Norman (3-22) and Alex Berry (3-17) impressing for Kidmore End.

In reply Julian Berry top scored with 42 not out as Kidmore End reached 136-7.