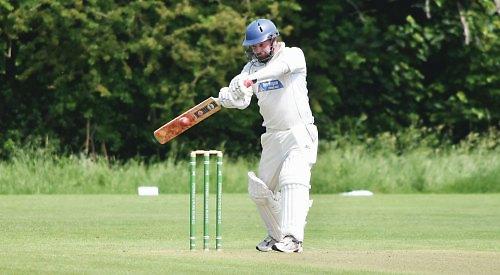 Visiting Skipper Godbole won the toss and decided to bat on a track that was tinged with green after a deluge of rain during midweek.

The Crowthorne openers made a solid start, laying a good foundation and seeing off the new ball pairing of Tom Hancock and Ed Birkett. The breakthrough eventually came with the introduction of seamers Aston and Wright, the former having the left-handed Avrili caught behind from a swinging delivery.

The pair bowled well in tandem, making the most of some muggy overcast conditions and wickets began to fall with regularity as Wright began to hit his straps during the middle overs. The Harpsden stalwart found some movement off the pitch to dismiss Barron for 17. The lofty seamer then found the edge of Cartledge and Crook in quick succession, both chances being snaffled by Adam Birkett behind the stumps.

Allwright was the next man to fall, half connecting with a slower ball from Aston and becoming the victim of a contender for catch of the season from Ed Birkett at long off.

Harpsden then introduced Harry Geyton to the attack, the debutant getting off the mark immediately by trapping Razman for 13. The new man bowled well in tandem with Wright who picked up another wicket soon after by having Alam caught at slip by veteran Will Stevens.

Geyton struck again, having skipper Godbole caught behind and Wright duly finished the job by having O’Laughlin adjudged lbw and Chandran caught at long on in an effort to up the rate. The seamer finished with a return of 6-21 from his 11 overs as Crowthorne were bowled out for 89.

The Harpsden response began poorly, with both openers Adam Birkett and Sam Imlay being dismissed by Crook, the fielding side making the most of taking the old ball from the off.

Ben Hancock was then joined at the crease by the skipper Christian Whittaker and the pair went on the attack with Hancock in particular being brutally dismissive of anything short of a length. The partnership had brought Harpsden to within sight of their target when Hancock was caught behind off the bowling of Chandran for a rapid 37.

Whittaker was joined by Will Stevens and the skipper hit a rapid 43 not out as Harpsden chased down the total inside 18 overs. The home side took a full 30 points with a clinical all round performance.

Elsewhere in the division Richard Ashton praised the character of his PEPPARD STOKE ROW side after they bounced back from consecutive thrashings to stun WEST READING by 87 runs.

West Reading won the toss and asked the hosts to bat first on a wicket which was somewhat saturated following a heavy thunderstorm late on Friday afternoon, and while Jamie Sharrock (27) looked in good touch, the hosts slipped to 38-3.

Dan Hayden and 17-year-old George Lee (29) rebuilt the innings in magnificent fashion, sharing a stand of 124 until the latter – who showed a maturity far beyond his tender years – was bowled by the returning Usman Tariq.

Olly Nicholson hit a couple of big sixes in a cameo 25 before Hayden was eventually adjudged lbw for a match-winning 98, a suspicion of an inside edge not sufficient to allow him a much-deserved century.

The Peppard Stoke Row tail once again wagged to some degree as they posted 237-9.

Taking the old ball, the hosts made a decisive move early on as Rahim Khan was caught at mid off by a diving Sharrock, Kazam Kamal was well taken by Hayden in the same position before Max Baker-Smith took his third wicket with the vital wicket of Adam Davidson, caught and bowled for 0.

Usman Tariq (81 not out) led a spirited fightback, but after Hayden took a couple of wickets with the new ball, Sampson (2-41) grabbed another and Sharrock (2-1 off 1) came on to seal the deal as West Reading were knocked over for 150.

Speaking after the match Ashton said: “This was a special result against a side likely to be challenging for the title.

“After the past two weeks to play the way we did in all three disciplines was superb. Dan’s innings was probably the best I’ve seen him play and George continues to look like a duck to water coming into the first team. I can’t praise the pair of them enough.

“Max joked with me on Friday that he would be the club’s best ever signing (he has previously played league cricket for Purley) and he proved himself right. With Dion, Dan and Jamie also bowling well and the fielding top notch, I couldn’t have asked for anything more.”