Butlin is in fine form at season’s opener 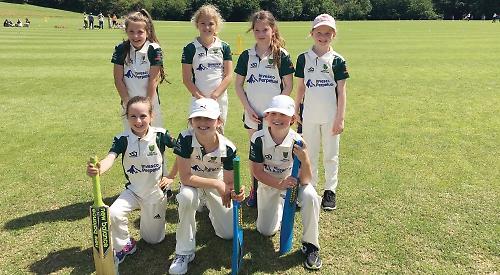 HENLEY Girls U10s got their festival season off to a good start as they won all three of their matches at Harpsden on Sunday.

Lily Bowlby, Dowsett, Martha Peach and Holly Butlin all took wickets while Lily Bowlby bowled a maiden over as Royal Ascot closed on 228-4.

Bowlby took a wicket with the first ball of the matchwhile Wildgoose also took a wicket and Dowsett took two in one over. Gillingham and Butlin bowled well and kept the Wargrave run rate low as they closed on 214-5.

In reply Dowsett and Gillingham had a strong opening partnership of 18, Butlin and Wildgoose followed well, with Quinn and Bowlby the final pair, scoring well as Henley closed on 258-2.

Having won the toss and electing to field first Wildgoose opened the bowling and the second ball resulted in a run out due to some fast work in the field. Gillingham took her first wicket with her first ball while there was some good bowling from Peach and Quinn in the middle. Butlin took two wickets in a row as Warfield closed on 255-4.

Chasing a high target Gillingham and Bowlby opened the batting with a strong partnership. Peach, who hit two fours, looked strong with bat in hand as she paired with Wildgoose. The final pair of Butlin and Quinn got Henley to their winning target with player-of-the-tournament Butlin hitting a four from the final ball to leave Henley on 255-4.

Elsewhere HENLEY GIRLS U12s started their Division 2 season with two wins out of three at Purley.

Big hitters Alex Cauchi, Holly Butlin, Liberty Simmonds and Phoebe Endean helped up the run rate in the first two matches. Alongside some good bowling included wickets off the first ball by Cauchi on two occasions.

For many of the side this was their first introduction into competitive cricket. Other players to take
wickets were Liberty Simmonds and Lydia MacDonald.

Nell Appleyard played well with the bat in her first match as did Niamh Quinn who played up from the U10s while Riya Lambu came close to bowling a maiden over.