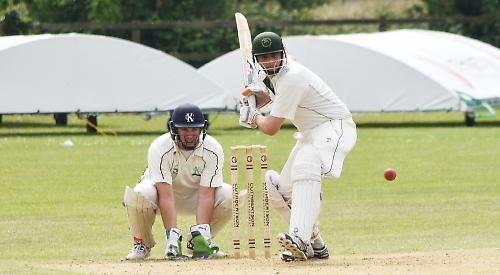 HENLEY 2nds slipped to their third Division 1 defeat of the season when they went down by seven wickets at STOKE GREEN on Saturday as league matches returned to traditional win/drawn/lose matches.

Having won the toss and electing to bat first Henley were bowled out for 151 with Charlie Homewood top scoring on 51 not out and David Allaway chipping in with 37. In reply the hosts reached their target for the loss of just three wickets (155-3).

In Division 2A KIDMORE END went down to a five wicket defeat against KEW at Gallowstree Common.

Having won the toss the Kew skipper chose to bowl first, knowing that bowling a side out on such a good batting pitch in the second innings would be tough.

Kidmore End made life difficult for Kew in the field. After a difficult few overs, when the ball was swinging and the pitch had not fully baked yet, Kidmore opening pair of Tom Sheldon and Jake Easton found their rhythm, as they began to strike boundaries, the opening stand of 55 when Sheldon (28) was bowled.

Easton followed shortly afterwards and this left a rebuild job for Burningham and Ashby. They went about it quickly putting on 76 for the third wicket in next to no time. Burningham was brutal off the back foot, whilst Ashby drove with aplomb.

The loss of his partner, Burningham for 34 victim of an lbw decision, did not deter Ashby (74), who was particularly merciless against the slow bowlers. He continued in the same manner alongside new partner Bodeker, who continued his good form this season, also driving and pulling well.

The score had reached 188-4 with just over 20 overs left in the innings when Chip Lawton (6-64) produced the best bowling of the afternoon as he took three quick wickets in a spell of bowling that was both accurate and skilful. Lawton had Bodeker (20) caught behind, bowled Leach (12) and had Grant caught as well.

This slowed the run rate and would, with hindsight, prove costly as Kidmore went from 188-4 to 207-7.

Frost and Jeff Sheldon started the initial rebuild, initially halting Kew’s momentum. Frost cut and glanced a few boundaries in this partnership, but the run rate had slowed noticeably.

Sheldon was dismissed for 11, bringing Zac Leonard, who was suffering from sun stroke, in to bat. Not entirely sure he could run Leonard struck several boundaries including a straight six off the back foot which soared over a forlorn fielder’s head. His last minute injection of boundaries meant the score would reach 267-9 from 52 overs, Leonard finishing 20 not out and Frost 29.

Kidmore’s defence of their total started well as Kew skipper Abbott was bowled by Ashby for 6. However, from this point on Kew took control.

Opener Rhys (52) was stoic in defence and powerful off the back foot punishing short bowling with ease. His innings was eclipsed by Ashley Hubburt scoring 136 not out from 140 balls in an innings of patience, precision and batting acumen. There were virtually no aerial shots as Hubburt kept the score board ticking over.

At the half way point of the innings he decided to accelerate the scoring and sought to strike a boundary off of the first two balls of the over and then would rotate the strike for the rest of the over. This meant Kew went at eight runs an over.

In Division 2B WARGRAVE were held to a draw at home against ROYAL ASCOT.

The hosts got off to a fast start, scoring 47 in the first five overs before losing Mandip Sohi (27) caught at long on. Fellow opener Will Allum (17) was adjudged lbw when the score was on 61 and Luke Taylor (18) departed shortly afterwards.

With three wickets down, the innings slowed, largely due to Andy Murray whose first nine overs only went for six runs. However, the patience of Michael Cowdell (39) and Neal Robinson (76 not out) was rewarded because with wickets in hand, Wargrave could accelerate the scoring in the remaining overs to finish on a very respectable 238-7 with Sam Bowers (25) providing some extra impetus at the end. Murray was by far the pick of the bowlers recording figures of 3-61.

Ascot started slowly against spinners Mark Firth, Mandip Sohi and Neal Robinson and were 46-2 after 20 overs. With the introduction of the new ball and the seam bowling of Jack Clark (7-1-47-4) there was a glimmer of a Wargrave victory, but with light rain in the air, Wargrave were unable to prize out W Ellisson (16 not out) with the J Wensley (115) only succumbing in the last few overs once the draw had been guaranteed and Ascot finishing on 178-7.

HENLEY 3rds remain bottom of Division 4A after going down to a four wicket defeat at THEALE AND TILEHURST 2nds.

Having lost the toss and being put into bat first Henley were bowled out for 157 with Mick Hilditch top scoring with 61 while Tom Chappell added 38. In reply the hosts reached 158-6 with Chris Johnson taking 3-28.

WARGRAVE 2nds were knocked off the top of Division 5B after going down to a three wicket defeat at ALDERSHOT 2nds in a match that saw the visitors end the game with just six fielders on the pitch.

Arriving with 10 players due to an unavoidable late withdrawal by one player, Wargrave were soon down to nine when Joe Warren (23) had to leave the field with a neck injury sustained while running between the wickets.

The Wargrave innings was dominated by Charlie Moss (98) who was bowled in the over after the halfway drinks interval. Matthew Townson (41) was that other main contributor to Wargrave’s 261-8 with Andrew Summers taking the majority of the wickets and recoding bowling figures of 12-2-69-4.

While in the field, Wargrave lost its third player – Freddie Lunch – to a hamstring injury. The Wargrave bowlers subsequently struggled to keep runs in check with only six fielders to support them it was almost inevitable that Ascot surpassed Wargrave’s total, which they did with two overs to spare with Calum Crover (50), Andrew Taylor (43) and Imran Shoudry (96) scoring the bulk of the runs.

Alex Crawford was in fine form with the ball for KIDMORE END 2nds as he took 5-20 to help his side defeat hosts EVERSLEY 3rds in Division 7A.

The home side, having won the toss, elected to bat and were bowled out for 84 runs. In reply Kidmore End put on 85-5 with Stefan Gordon top scoring with 33.

In Division 8A WARGRAVE 3rds went down to a 71 run defeat at DATCHET 4ths.

Having been put into bat by the visitors Datchet were dismised for 200 with Richard Gostelow top scoring with 103. In reply Wargrave were dismissed for 129.

Having lost the toss the home side, batting first, put on 214-8 with Callum Driscoll top scoring with 40. In reply Newbury ended their allotted overs on 209-7 with Nathan Ruegg taking 3-46.