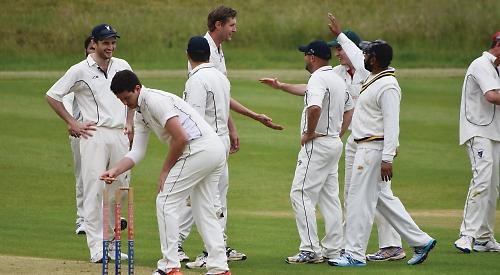 AFTER dominating for most of the game, HURLEY engineered a dramatic climax before running out winners in their Premier Division clash with MONKS RISBOROUGH at Shepherds Lane last Saturday.

Shehzad and M Amjad put on a patient fifth wicket stand of 68. However with the fall of Shehzad and the score on 104-5 to Shabob Riaz another tumble of wickets saw the visitors decline to 112-7. Tim Golabek plucked Amjad one-handed at square leg while Khan were was out lbw to Jonothan Langlands.

The last three wickets added 58 with Alam and Jameel hitting useful boundaries. Akhtar eventually brought himself back and bowled Iqbal with his first over of his second spell to dismiss Monks for 170 in 43 overs.

After tea, the Hurley reply proved solid in not losing early wickets as Akhtar and Simoes added 74 in 24 overs. But with a good outfield and a wicket of variable bounce, the run-rate was adding pressure. Iqbal proved difficult to get away. Akhtar fell to Butt bringing 15-year-old Josh Cole to the crease. Cole played a fine innings driving with power but unluckily more often to a fielder as 37 were added before Simoes was trapped lbw for 54. Hurley struggled to up the run rate despite a brief flurry from Riaz.

With five overs remaining, Hurley required 16 but with wickets in hand. Golabek and Cole were bowled in successive overs leaving Double and Arshad at the crease. Three overs left and 11 needed. Double scampered a single while Arshad hit a square boundary. Double then played out a maiden from the penultimate over with Arshad refusing a single from the final ball of the over.

Seven runs were wanted from the final over. Arshad picked off two twos and a single leaving Double on strike for the last three balls. Double played a dot. The fifth ball was punched square as Double ran for a second run. The keeper fumbled and Double was home with the winning runs.

Visitors BRAYWOOD 2nds held on for a draw at HARPSDEN 2nds in their Division 1 clash.

Home skipper James Brooks won the toss and elected to bat on what looked to be a good batting surface that might give some help to the bowlers early on.

The Harpsden openers got off to a flyer with Sasha Burgess being particularly savage on anything short or over pitched and he and Liam Eslick coasted along at six over without too many scares.

The fast outfield helped the scoring rate and it was only the loss of Burgess for 53 in the 18th over after an opening partnership of 108 that put the brakes on things but that was not to be for long as Michael Shortis got quickly into his stride.

Eslick continued to play low risk cricket and compiled 66 before being trapped in front by the Braywood skipper. When Shortis was joined by James Paice, Shortis took on the responsibility for pushing the scoring rate along and was only dismissed by an impressive one handed catch at long on off by Mohammed. James Brooks and Toby Stevens continued to score at over six an over and, in conjunction with James Moore, pushed the score along to 282-6 before Brooks was able to declare an over early to allow the Harpsden bowlers 44 overs to dismiss Braywood.

Harpsden’s decision to start with the old ball looked to be a good one as Shazad Gulfraz firstly had Mohammed trapped in front for 1 and then cleaned bowled Kazmi for a duck.

Ali and Khan then consolidated before Tom Dawson surprised Khan with a quick short ball that he could only guide to Moore in the gully and he held on to a good diving catch.

Warsi was bowled soon afterwards by a Dawson yorker before a partnership ensued between Ali and Johnston. It was Abdul Khaliq who was to get the breakthrough as Johnston tried to break the shackles that Khaliq was imposing by trying to hit him over Burgess at mid on but the fielder held on to a good catch going backwards. James Moore dismissed both Ali and Hussain caught in the slips by Toby Stevens.

Toby Stevens then had Farooq caught behind and Harpsden just needed two wickets in the last 15 overs to complete a second successive win. This was not to be as resolute defence was mixed with judicious stroke-making from both Jeyatharajah and Kyal. Brooks juggled his bowlers well but a few difficult dropped catches and the emergence of some good fortune that had evaded Braywood for the rest of the day ensured that the visitors claimed a draw.

The home side won the toss and opted to bat first, opening with the experience of Terry Bentley and the youth of Lochie Christopherson. The youngster fell after only four deliveries, having pulled a short ball from Scott Taylor over mid-wicket he lost his middle stump attempting to do the same to a full, in-swinging delivery.

A one handed catch off his own bowling by Alex Williams put paid to Kenzie Christopherson and the hosts found themselves languishing at 12-2.

Henry Barber joined Bentley in a stand of 40 for the third wicket but Taylor struck twice more before the drinks interval to reduce the hosts to 73-4.

Fayyaz Kayani struck immediately after the drinks break, his extra pace proving too hot for McGrath and an excellent slower ball to dislodge the dogged Bentley. At 82-6 it was touch and go whether Penn would claim a batting point, but they managed to get to three figures before Dave Walton picked up two wickets. The first was down to a catch at fine leg by Hassan Gull when Doug Marriot smashed a full toss at the youngster who calmly pouched it. Clive Williams at slip managed to cling on at the third attempt to an edge from Judge off Gul.

With the end in sight, Williams recalled Kayani to finish off the innings which he did with his third delivery, re-arranging Richard Woodhead’s stumps to give Hurley a target of 121 in 52 overs.

Hurley’s opening pair of Clive Williams and Abdullah Ali carried on where they left off in the previous encounter with Penn and Tylers, posting 99 for the first wicket. Rarely troubled by the bowling, it looked like a run out would be the most likely way to take a wicket, with Williams becoming frustrated at Abdullah’s reluctance to run singles.

The partnership was finally broken in the 22nd over when Sean McGrath bowled Williams. Abdullah followed soon after, when failing to respond to Mike Walton’s call for an easy single, he was run out just after reaching his half century.

This hiccup failed to derail a Hurley victory as Walton and Yasir Gul saw their team home with 25 overs to spare, although Gul did have a life when dropped by the keeper off Cartwright.