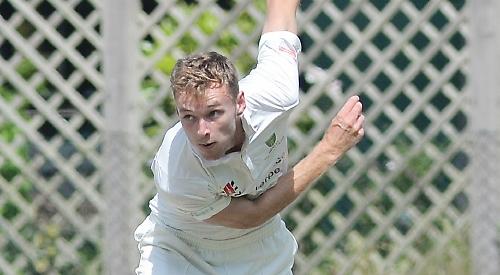 BERKSHIRE’S hopes of retaining the Unicorns Trophy ended when they lost to DEVON by 22 runs in a highly-entertaining quarter-final tie at Sidmouth last Sunday. They were dismissed for 251 as they replied to the hosts’ 273-8.

It was Berkshire’s first defeat in the trophy since they were beaten by Devon, also at the quarter-final stage, two years ago.

The holders made a dream start after their hosts had elected to bat first on an overcast morning at the seaside venue with Tom Nugent taking two wickets with his first three balls, and the Henley paceman struck again with the total on 28.

However, Ben Green and Matt Thompson led a spirited recovery, taking the total to 126 in the 28th over before the former was bowled by Euan Woods for 66.

And just after Thompson had reached his half-century he, too, fell to Woods, this time to a catch by Chris Peploe. Thompson made 53. leaving Devon 167-5 with 38 overs gone.

This brought together another two of the Bess family, Josh and Zak, both related to new England star Dominic who had helped Devon to beat Berkshire when they met in the same competition at Exmouth two years ago. The pair added 58 in seven overs, a stand that ended when Josh fell to a catch by Ollie Birts to give Nugent his fourth wicket of the match.

Zak continued to punish the Berkshire attack, frequently finding the boundary as he smashed 73 not out off 45 balls with five 6s and five 4s.

Ali Raja bowled Gary Chappell for 10 and Nugent had Scott Barlow caught behind by keeper Jack Davies to give him excellent match figures of 5-52 off 10 overs. Woods finished with 2-47 from 10 and Raja 1-46 from seven.

It was the first time Davies had donned the gloves for the team with usual keeper Stewart Davison willingly taking over the 12th-man duties at a time of his career when Finchley’s director of cricket is looking to concentrate more on coaching.

Opening with Henley team-mate Davies, Rishton attacked the Devon bowling from the start, racing to his half-century inside the opening 10 overs, but he was then trapped lbw by Josh Bess, his 50 containing 10 boundaries.

Davies departed for 32 before Richard Morris went for a second-ball duck, leaving the total on 106-3 in the 18th over.

Dan Lincoln struck two sixes, but didn’t last much longer, being caught by wicketkeeper Thompson for 16, making it 128-4.

When Woods (34) was also snapped up by Thompson, Berkshire had lost half their side for 149 by the end of the 28th over.

Skipper James Morris and Peploe worked hard to rebuild and it was looking promising when they needed 62 runs to win with 10 overs remaining.

But then Peploe edged Jack Popham to Thompson when on 20, making it 214-6, and 12 runs later Morris followed him back to the pavilion, having made 51 off 72 deliveries.

Joe Thomas scored 17, but he, Nugent (8) and Ali Raja (run out before facing a ball) were all dismissed in the 48th over, leaving the visitors short of their target on 251.

This Sunday Berkshire complete their eight T20 group games with a double header against Herefordshire at Eastnor.