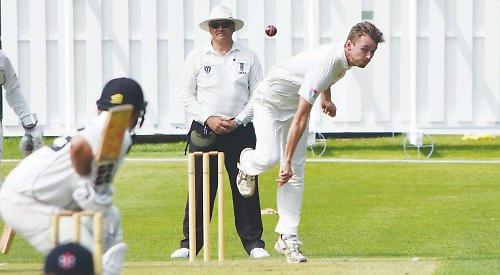 BERKSHIRE have qualified for the MCCA Twenty20 finals day at Wormsley in August.

They finished top of Group 2 after a win and a narrow defeat against second-placed HEREFORDSHIRE at Eastnor on Sunday.

In their first game, Berkshire scored 163-8 with Chris Peploe top scoring with 49, followed by Andy Rishton (28), Euan Woods (26) and Middlesex 2nd team player Joe Cracknell (23) on his debut. They then restricted their hosts to 139-6 (Joe Ellis-Dabrowski 50 not out) with Datchet’s slow left-armer Ollie Birts taking 4-27, with two wickets coming off successive deliveries in the first of his four overs, so completing a 24-run victory.

The second game proved a much closer affair. Berkshire looked in serious trouble at 32-6 in the eighth over, but Richard Morris led a tremendous recovery, cracking an outstanding 79 off just 49 balls with three maximums and five fours. He was well supported by Sukhi Kang, who contributed 30 from 33 deliveries, the pair putting on 106 for the seventh wicket in 12.2 overs, leaving Berkshire on 138-6.

Two wickets from Birts and one by his Datchet team-mate Peploe left Herefordshire 36-3 off 6.1 overs but a fourth-wicket stand of 40 in four overs improved their position.

Peploe took two wickets in as many deliveries to leave the game in the balance, but Tom Hage scored a useful 35 off 27 balls before Peploe caught him off the bowling of Tom Nugent.

It was building towards a nervy finish with the hosts requiring 11 off two overs. Rishton ran out Ian Bullock (128-8) and eight runs were required from the final over bowled by Nugent. The paceman dismissed Alex Wilkinson for 12 off his fourth ball, but Dan Conway scampered two off the next to earn his side a one-wicket win with a ball to spare. Nugent finished with 2-35, Peploe 2-16, Birts 2-31 and Woods 1-28.

The finals day is on Sunday, August 26, with Berkshire being joined at the Buckinghamshire venue by Devon and Norfolk, plus the winners of Group 1.

Cheshire currently top the table, but could possibly lose out on net run rate if either Cumberland or Northumberland complete a double when they meet at Workington next month.

Berkshire open their defence of the Unicorns Championship by playing Oxfordshire at Wargrave CC in a three-day game, starting on Sunday (11am). They recently defeated their neighbours in the T20 competition at Falkland.

Berkshire have not lost a championship game in the last three seasons.

In the national women’s T20 competition, Berkshire met with mixed results on Sunday for the second weekend in succession.

Playing two games at Dumbleton, they batted first against Gloucestershire and posted 110-4 with Emily Cunningham making 28, fellow opener Amanda Potgieter 21 and Lauren Bell 21 not out. In reply, Gloucs collapsed from 46-1 to 73 all out with Rachel Hardy taking 3-8 off 3.4 overs, Emma Walker 3-10 and Phoebe Graham 2-10.

But the young Berkshire side then lost by 24 runs to Cricket Wales, making 108-8 as they replied to their opponents’ 132-9.