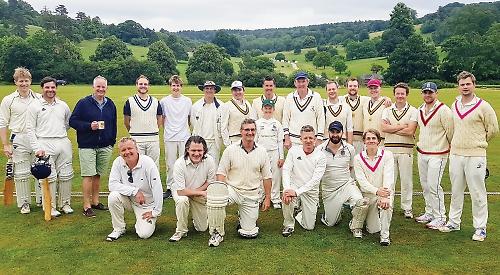 THIS year’s Hunt Trophy was held at STONOR and coincided with the club celebrating Richard Hunt playing at the club for 60 years and still going strong.

TURVILLE PARK won the toss and elected to bat and a strong start from Sam Beardall was fleeting as suddenly the visitors were 28-3 after four overs.

Accurate bowling from Oli Kavanagh and John Powell kept the batting team thinking and James Hunt anchored the Turville team innings. Wickets fell at the other end with Rowan Austin getting 4-33.

The arrival at the crease of Charlie Hunt saw his grandfather brought on to bowl and this was an excellent familial battle for several overs. Eventually Turville were bowled out for 122.

The Stonor innings was moving along nicely with Williams and Jewell but accurate bowling by Charlie Beardall kept the home team on their toes and mindful that chasing a low total can often lead to a batting collapse.

John Powell eventually provided the winning runs in the last over of the game to see Stonor win back the Hunt Trophy.