Henley side maintain their winning run 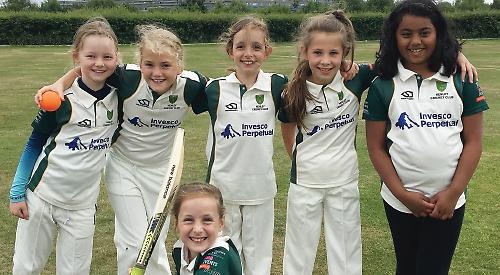 HENLEY GIRLS’ U10s remain undefeated in their league matches as they won all three matches at the second festival at a blustery Royal Ascot on Sunday.

The team of Sophia Dowsett, Nancy Gillingham, Riya Lambu, Niamh Quinn, Lily Wildgoose and Fleur Wood opened up the tournament with a 29-run victory against MAIDENHEAD AND BRAY U10s.

Captained by Dowsett Henley batted well with the skipper, Wood and Gillingham all hitting fours as Henley put on 229-6. In response strong bowling from Lambu restricted Maidenhead and Bray to 258-3.

A wicket from Riya Lambu in the first over was followed by wickets from Dowsett and Wood. Once again Henley fielded well.

The weather grew colder and windier as Henley went into bat. Quinn and Gillingham had a strong partnership with quick running between the wickets and hitting a four. Another four from Lambu increased the runs with Wood, Dowsett hitting another two boundaries with plenty of singles in her partnership with Wildgoose.

Wickets were taken by Gillingham, Dowsett and Quinn whilst Gillingham and Quinn paired well again with the bat in a partnership of 19 with player-of-the-match Gillingham hitting four boundaries from four deliveries.