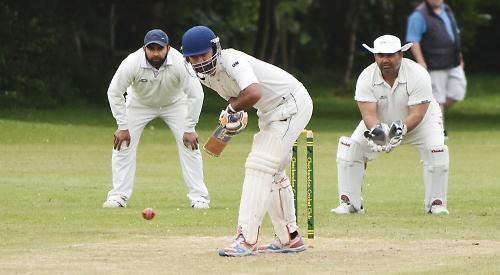 CHECKENDON retained their grip on top spot in the Premier Division courtesy of a thrilling run chase against title rivals WOODLEY last Saturday.

The visitors opted to bat on a fair pitch at the Checkendon playing field and raced away at the start thanks to 42 from captain Nutail and 45 from all rounder Miraque.

Vikas Chib brought the home team back into the game with three wickets in his 12 overs and later showed firm leadership, trusting left arm spinner Harry Wickens to clean up the tail at the death, which he duly did, taking 3-25, finishing the innings with a sharp return catch.

A target of 205 was a challenge and Checkendon had a less than ideal start, losing 2-28, including James Allaway run out off a deflection at the bowler’s end.

Regular opener John Acland-Hood stepped up with an undefeated century, supported initially by wicket-keeper Matt Heslop and later by a 13-ball 19 from Amol Tyagi.

The winning run came in the 43rd over with three wickets standing.

Winning the toss and with a perfect batting track at WOODCOTE, home captain James Worsfold decided to field first and it proved an inspired choice against IBIS MAPLEDURHAM.

The visitors were 71-5 at the halfway mark with Ryan Van Heerden, Jonny Clark and Steve Henderson all proving difficult for the Ibis batsmen.

A good stand between Jones and Whiley revived the visitors’ innings, but with Pete Roberts and James Worsfold bowling a tight line, they were unable to accelerate and at tea Woodcote were optimistic about their chances.

Ryan Lennard and Paul Knox batted well to put on 134 for the first wicket. The win was achieved in just over 25 overs and was fittingly brought up with a huge six by Paul Knox into the Red Lion.

GORING went down to a four-wicket defeat at BERKSHIRE COUNTY SPORTS.

Winning the toss and electing to bat first the visitors were dismissed for 130 with Raja Raget taking 5-30 for the home side.

In reply Berkshire County Sports reached their target of 131-6 off 33 overs with Peter Slade returning bowling figures of 4-13.

Josh Perkins starred with bat and ball, but it wasn’t quite enough to help PEPPARD STOKE ROW 2nds avoid a four-wicket defeat at CROWTHORNE AND CROWN WOOD 2nds in Division 1.

A good team batting performance from the visitors included useful contributions throughout the order from Perkins (44 not out), Dom Hall (38) and Matt Ravden (32), Peppard Stoke Row ending their 45 overs on 198-7 as Nirav Uphadyay took 4-41.

Perkins (3-55) grabbed two early wickets as the visitors took the old ball, but Ant Avrili (56) and Simon Sheppard (59) wrested the initiative back for the Crows with a useful third-wicket stand.

Youngster Alfie Burnett took 2-37 after the new ball was utilised, but the home side were able to just squeeze over the line, reaching 199-6 with 11 balls to spare.

The destructive Mark Lambert came and went quickly and despite Asquith working his way to 134 not out, the Sulhamstead death bowling proved too efficient and Peppard Stoke Row could only reach 223-3 in reply.