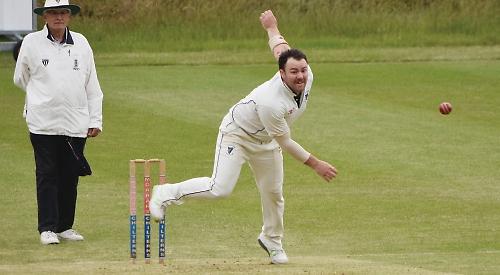 HARPSDEN put in another ruthless performance with the bowlers laying the platform, backed up by good fielding, for the batsmen to clinically wrap up a victory at home to WELFORD PARK last Saturday to keep the villagers top of the table.

The hosts got off to the best possible start, winning the toss and asking the visitors to bat on a humid, cloudy day.

This proved to be an excellent decision as Welford Park were reduced to 11-3, with Hancock picking up all three wickets, including danger man Herrington without troubling the scorers.

McManus and Soni then set about rebuilding the innings as they took the score to 38 before McManus fell to the bowling of Tom Stevens.

This brought Hutchinson to the crease, who, despite a nasty blow to the elbow, showed plenty of steel in his 27, but he never found a partner to stick with him, and with wickets falling at regular intervals Welford were staring down the barrel.

The introduction of Will Stevens to the attack produced two more quick wickets to leave Welford 94-9. Any chance of a vital last partnership was instantly dashed as the returning Hancock clean bowled Fox to finish with figures of 4-9 from his 8.2 overs.

With Harpsden chasing a small total, Eslick and Ben Hancock wasted no time in stamping their authority on the match, regularly finding the boundary as the Welford bowlers struggled to find the right length.

With the 50 partnership brought up Hancock in particular went further through the gears as he brought up his half century from 41 balls, including 11 fours and a six. This left Eslick to smash the winning runs through cover as Harpsden completed a 10 wicket victory in the 15th over.

PEPPARD STOKE ROW’S Dan Hayden put in an explosive innings that catapulted the hosts to an emphatic eight-wicket win against CROWTHORNE AND CROWN WOOD.

Stand-in captain Michael Chard won the toss and decided to bowl first on a flat track at Peppard Common, but Alfie Clifton (3-33) and Sam Fooks (3-35) ripped through the visitors’ top order before Dion Sampson bowled Nikunj Mehta to leave Crowthorne and Crown Wood reeling on 60-7.

Skipper Nick Outram and Marvin Vogel (both 37) showed the quality of the surface as they rebuilt the innings, but with Sampson (2-43) adding another, Olly Nicholson grabbing a wicket and Fooks enacting a run out, Crowthorne and Crown Wood were bowled out for 153.

Hayden, who was promoted to open the batting for the hosts, blasted 15 boundaries and five maximums in a 65-ball 124 not out innings which helped his side chase the runs in a mere 18.3 overs with youngster George Lee again providing useful support.

After the match Chard, speaking on Hayden’s innings, said: “Some of his ball-striking was unreal – I’ve never seen anything like it. It was a simply fabulous knock.”