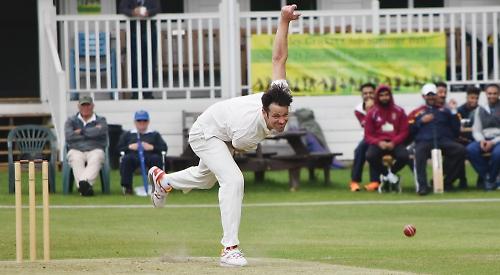 HENLEY 2nds moved up to fourth place in Division 1 following a six-wicket win against SLOUGH 2nds at the Brakspear Ground last Saturday.

The visitors, having won the toss, elected to bat first and got off to a good start putting on 95 runs for the first wicket. However, when opener Ahmed was first out wickets began to tumble as Slough lost three in quick succession to leave them on 103-4. Eventually the visitors were bowled out for 213 with Zia Ashraf taking 4-46 and Sean Taylor 3-34 for the home side.

In reply Henley put on 41 runs before Tom Oldershaw was bowled for 18. Will Legg joined opener Ashraf at the crease and the duo put on 47 runs before Ashraf was out lbw for 41. Chris Ellison was out, caught, for one run before Charlie Homewood came in and put on a match-winning partnership of 115 with Legg.

Legg was caught by Ahmed, bowled Jamshad for 107 to leave Homewood to hit the winning runs.

In Division 2A visitors KIDMORE END suffered a four-wicket defeat at HAYES.

Skipper James Frost lost the toss and the visitors were put into bat. Easton opened the batting with Burningham who struck a number of boundaries off the back foot. But, once the lacker had come off of the ball, it started to move laterally and the Kidmore top order struggled.

Athar Khan picked up 3-17, removing Burningham, Ashby and Ingrams and the pressure he generated forced mistakes at the other end too, with Easton being run out, and Bodeker caught behind.

The Kidmore top order had collapsed losing half their wickets before the innings was even halfway through. This meant initially Frost and Leonard, but then Frost and Sheldon, had to rebuild the innings. This was not easy.

With the spinners now operating on a pitch that was producing prodigious spin, sometimes turning more than two metres. Leonard scored 20 runs, all in boundaries, but when he was caught Frost and Sheldon batted a long time to try and rebuild the innings. Together they got the score up to 120 before Frost was lbw for 29.

Sheldon struck a few boundaries in the last six overs, including a six over extra cover, and with a few hits from Mike Jones Kidmore scored 149 all out in 51 overs, with Sheldon too scoring with 43 not out.

In reply Hayes came out hitting hard as Kidmore aimed to take as many wickets as possible for bonus points.

Ingrams took the first wicket, Mike Jones the second while Frost came close on a number of occasions but was unable to get a wicket. Shaun Burningham pulled off a run out with a direct hit from a throw, having collected the ball off a deflection from the bowler’s leg.

Spinners were the most threatening on the pitch. Ashby bowled well for his two caught and bowled wickets while Faroqi bowled one batsman thanks to skilful flight. Kidmore took six wickets but due to the low total of the first innings Hayes were never challenged enough as they eased to victory.

In Division 2B Jack Clark blasted out ALDERSHOT for just 64, taking 6-30 and setting up an easy 10 victory for WARGRAVE to maintain their undefeated start to the season.

HENLEY 3rds are still searching for their first Division 4A win of the season after going down to a six-wicket defeat against SULHAMSTEAD AND UFTON at Nettlebed.

Having lost the toss and being put into bat first Henley were bowled out for 171 with Oliver Buckle top scoring with 52 and Rob Kenworthy chipping in with 40. In reply the visitors reached their target of 174-4 in 34.1 overs.

WOKINGHAM 3rds secured a comfortable six-wicket victory against WARGRAVE 2nds in Division 5B, bowling the hosts out for just 98 within 25 overs and knocking off the runs within 18 overs.

Kidmore won the toss and elected to bat first on a flat wicket. With the home team on 18-2 that decision did look suspect but a 71-run partnership between Mark New (23) and Sinclair got the Kidmore innings back on track.

The home team’s innings was however dominated by a 158-run partnership in 21 overs between Sinclair and Stefan Gordon with the latter in the process recording his maiden Kidmore End half century. Sinclair made an impressive 151 containing 23 fours and a six from 120 balls before he was dismissed and with Gordon’s 51 and a late flurry from Jonny Abbott Kidmore declared on 285-6 from 46 overs.

The declaration left Newbury 54 overs to get a winning score of 286 which they started off in rapid pursuit of as the visiting skipper Simon Digweed took a liking to Kidmore’s opening bowler Nish Rajmahon and he went to 20 in the space of three overs.

However, with his dismissal for 21 by Udeen the momentum was slowed and with the home bowler gaining in confidence and Jonny Abbott replacing Rajmahon, Kidmore started to dry up the runs. Udeen gained another breakthrough by bowling number three Vikas leaving Newbury on 54-3. Udeen, now bowling with good pace and an immaculate line, went through the remaining Newbury top order and left the visitors reeling on 65-5 with all five clean bowled.

Newbury then counter-attacked as Guy Davis with 38 and Joe Worsley with 37 added 81 before both were dismissed by Udeen. Kidmore rotated the bowlers with Udeen taking a well-earned rest. The Kidmore bowlers kept Newbury in check but were unable to make the breakthrough and it took Udeen coming back for a second spell to take a further wicket as with seamer Sam Crawford also gained a wicket.

Newbury were now defending trying to hold out for a draw but Udeen dug deep and removed the Newbury number 11 Zac Forrest and in the process collected the impressive match figures of 20.1-6-46-9.

THATCHAM TOWN 3rds scraped home with a one-wicket Division 8A victory against WARGRAVE 3rds in a low scoring encounter.

Hosts Wargrave, batting first, lost wickets early with Thatcham’s Kevin Prescott (6-44) the main protagonist. Only a late flurry from Alex Hands (42) towards the end of the innings got Wargrave up to 120 all out in just 26.4 overs.

Thatcham wasn’t to have it all their own way chasing Wargrave’s mediocre score with young leg spinner Gabriel Birch (7-0-32-4) causing them all sorts of problems and supported well by fellow youngsters Christopher Hattey and Nitesh Ummat with two wickets each. An important 30 by Jai Krishna batting at 8 got Thatcham close to victory, but it was left to the last wicket pair to get them over the line.

KIDMORE END 3rds remain in third place in Division 9A despite going down to a one-run defeat at MAIDENHEAD AND BRAY 4ths.

Having won the toss and electing to bat first the home side put on 192-8 with Harry Ingram taking 4-39 for the visitors.

In reply Ankur Raina hit 68 and Todd Butler 35 as Kidmore finished their innings just one run short of their target on 191-9.