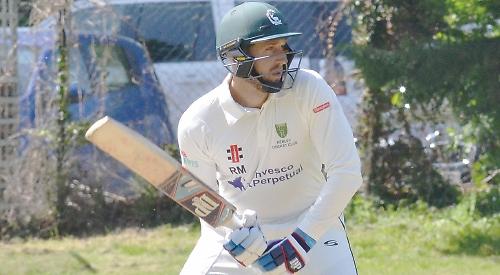 From the outset Henley played the majority of the cricket, amassing 311-9 declared off 63 overs, before having the home team 176-8 off 49 overs. Unfortunately, the ensuing rain meant four overs were lost, saving the then league leaders blushes and preventing a win for the visitors.

The result leaves Henley looming large behind the current top five, who are separated by only five points, setting up a mouth-watering fixture against new leaders Slough at home tomorrow (Saturday).

Having won the toss, an overcast and green wicket left Wycombe captain Nathan Hawkes with the easy decision of bowling first. Despite the bowler-friendly conditions, the hardness underneath meant opening bowlers Hampton and Parsons needed to get their lengths right in order to take full advantage.

With Roberts and Rowe both in fine form with the bat, the slightly wayward start from Wycombe meant Henley were quick to capitalise and made solid progress whilst also taking the shine off the ball. Scoring at five an over, both Henley batsmen played aggressively and put the pressure back on the Wycombe attack.

It wasn’t until the score had reached 68 when Roberts became the first victim of the day, bowled by a Marles delivery. Woods joined Rowe and played freely, racing to 29 before he pulled a long-hop from spinner Haddow to mid-wicket with the score comfortably past the 100 mark.

At this stage Rowe had past his half-century and with some good stroke play, looked set to pass the century he almost got the previous week. However, on the stroke of lunch, he received a snorter of a delivery from returning opener Hampton, who nicked Rowe to slip, leaving Henley 167-3 at the lunch break.

Although debutant Jones was out soon after the resumption of play, adjudged caught behind to a delivery which may have caught the batsman’s sleeve, Morris and Barnes came together to put on a crucial partnership of 71.

Both players complemented each other nicely, with Morris racing to 74 in typically ruthless fashion, before he ran past spinner Dobb to be stumped with the score on 240-5.

Barnes continued effectively and shared partnerships with both Williams and Brock before he was then dismissed for 40. With a few further lusty blows from Nugent, Henley soon declared on 311-9. After a slight rain delay, Wycombe began their innings well with Henley’s seamers failing to learn from Wycombe’s, bowling a little too short and wide and struggling to build pressure. However, having found his rhythm, Nugent soon had Casterton caught behind by Williams for 13.

Marles joined Callis and both batters looked comfortable, although neither player showed any real intent of winning the game. Marles looked to accelerate with the score on 88 but could only edge the spin of Woods to Nugent at slip. Soon after skipper Hawkes became the victim of his strength, being caught at point by Woods off Singh.

Tea came and went and it wasn’t long before Callis’s luck ran out, trapped lbw by Singh for a frantic 52. By this stage, with the score on 130-4, Wycombe had now lost any interest in going for the win, if there was any at the outset.

Singh and Woods bowled well in tandem with the latter soon accounting for Baker, whose carefree knock came to an end with Wycombe now in danger of being skittled. Russell and Hatton combined to chew up the overs, defending well and riding their luck as Nugent was reintroduced to the attack. However, it was Singh who struck next, bowling Russell and opening up the home team’s tail-end.

Hatton was trapped lbw by Nugent before bowling Haddow soon after, leaving Wycombe on 170-8. The home team held firm and once the rain began to set in, ensured the covers were on before any other decision could be made.