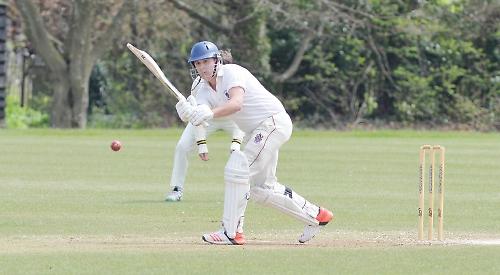 ZAC JONES top scored with 55 for visitors HENLEY 2nds last Saturday but it was not enough as his side went down to a five wicket Division 1 defeat at NORTH MAIDENHEAD.

Having won the toss and electing to bat first Henley were bowled out for 234 with Tom Oldershaw chipping in with 43.

In reply North Maidenhead reached their target of 236-5 to win the match in just over 43 overs.

Kidmore skipper James Frost won the toss and took the surprising decision to bowl first as he felt his spinners could take control of the game on a dry pitch that had been baking all week.

Frost and Easton opened up and kept things tight with the new ball. However, the openers were unable to make the breakthrough, despite and the fine opening spell from Easton, in which he frequently beat the bat.

The game was spun right round, when the slow bowlers came on. Ashby and Crawford initially put a grip on the batting with nagging accuracy, drift and turn. Ashby produced one of the finest bowling displays he has ever produced for Kidmore End. He made the breakthrough with the score on 46 when he bowled Fleming for 29, it did not take long for Ashby to take another, when Jeff Sheldon took a good catch at mid-off thanks to a mistimed drive.

Crawford got in on the act thanks to a stumping by Zac Leonard. The score of 69-3 quickly became 116-6 as Ashby’s impressive drift and flight bamboozled the batting side, bowling one and having two batsmen caught by Jeff Sheldon and Umer Faroqi. Ashby had taken five of the first six wickets to fall, while Crawford bowled accurately but without reward.

As the ball became softer, Frost decided the batting side had become too settled so he introduced Faroqi’s wrist spin into the attack. This change of trajectory and style almost paid off immediately, as Faroqi maintained his fine strike rate, his first wicket coming from a diving lunging catch by Mike Jones at mid-on.

Ashby was starting to tire and so was taken off finishing with first team career best figures of 5-67 from 17 overs. Crawford (12-3-32-2) replaced him, and after a brief experiment with a seamer it was clear the only way forward was spin. He snared a wicket, caught at first slip by Frost, whilst Faroqi finished off the tail as he took the last two wickets forcing a top edge that was caught at square leg by Crawford and bowling the number 11 out quickly. Amersham were all out for 179 in 47.2 overs.

Despite the favourable conditions for batting the Kidmore openers managed to get themselves out, possibly attacking too soon, and also being frustrated by the lack of pace on the ball as the hosts were wobbling on 17-2.

Jeff Sheldon decided to blunt the attack making full use of his height and smothering the ball, whilst Shaun Burningham took a more modern approach, counter attacking the bowling.

The leg spin of Robbie Marsh was dutifully respected by Sheldon and abused by Burningham who struck four boundaries, including two sixes in one over off the hapless spinner.

Amersham took the new ball and young seamer Buchanan bowled well as he took the important wicket of Burningham for 58 (from 49 balls). The accurate bowling increased the pressure on Kidmore End and the inability to rotate the strike meant some pressure mounted.

Ashby was bowled with the score on 91 and Sheldon fell 33 runs later. He scored a valuable 20 runs from 80 balls, a watchful innings punctuated by some flowing cover drives.

Vice-captain Leonard and Ingrams would, however, see Kidmore End home. The contrasting stature and style of the two batsmen made it difficult for bowlers to find the right length. Leonard pulled, cut and swept, whilst Ingrams stood up playing off the front foot with an immaculately straight bat. Ingrams was initially cautious, but when he felt he had got the measure of the bowlers and pace of the wicket he unleashed a flurry of boundaries, with five drives along the ground and two strikes for six, one of which startled the horses in the nearby field and allowed Kidmore to win at a canter by five wickets.

WARGRAVE remain hot on the heels of Division 2B league leaders Beaconsfield after beating visitors HURST by seven wickets.

Batting first the visitors were bowled out for 143 with Wargrave hitting 147-3 in reply to win the match with Luke Taylor top scoring with 58.

HENLEY 3rds continue to look for their first Division 4A win of the season after going down by eight wickets at BINFIELD.

Having won the toss and electing to bat first Henley were dismissed for 127. In reply Binfield eased to 129-2 to win the match in just over 22 overs.

In Division 5B WARGRAVE 2nds crashed to an 89 run defeat at BRACKNELL.

Having won the toss and putting the hosts into bat first, Bracknell were bowled out for 190 with Charlie Moss, Hareesh Reddy and Martin Smith all taking three wickets each. However, in reply Wargrave were dismissed for 101 despite Alex Hands top scoring on 48 not out.

KIDMORE END 2nds eased to a 10 wicket Division 7A win at THEALE AND TILEHURST 3rds.

Having won the toss and electing to bat first the hosts were bowled out for 103. In reply Kidmore eased to 104 without loss.

WARGRAVE 3rds beat BRACKNELL 2nds by 55 runs in Division 8A.

Winning the toss and batting first the hosts put on 228-5 off their allotted overs with Sam Warren top scoring with 60 and Scraven Kondina hitting 56. In reply Bracknell were bowled out for 173 with A Hatty taking 5-25.

The home side, batting first, put on 228-8 with Luke Gray top scoring with 48. In reply Thatcham were bowled out for 138.