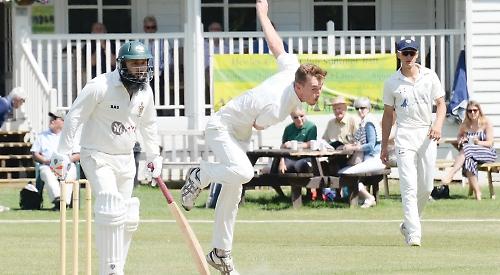 FOUR wickets from Euan Woods and 77 not out from skipper Michael Roberts drove HENLEY to a comprehensive victory against SLOUGH, who at the time sat at the top of the Home Counties Premier League going into last Saturday’s clash.

However it was very much a team performance, with the home side’s bowling attack beginning to click as a unit, well supported by a strong fielding display.

It was potentially one of the first truly dominant performances of the season, the type of display which has become characteristic of the defending champions in recent seasons.

With still over half the season to play, Henley must kick on from here and begin their charge to the top of the standings, starting tomorrow (Saturday) at Tring Park.

Winning his first toss for three weeks, Henley captain Roberts decided to bowl first, negating the chance of the opposition holding out for a draw whilst providing the Henley batting line-up with the challenge of chasing anything down. This despite giving Slough potentially best use of a used wicket which could have crumbled as the game went on.

The Henley attack went to work and despite being a little wayward, reduced Slough to 47-2 quickly. Nugent was the first to strike, nicking Rafiq to Roberts at second slip before Woods, replacing Afridi from the Remenham Hill End, had Louth caught softly at mid-off again by Roberts.

Overseas player Shahid Yousaf joined ex-Henley man Qureshi and both looked at ease at the crease and threatened to take advantage of what was ultimately a good batting surface. Another soft dismissal soon followed, thanks to some good pressure being built by Woods and now Singh, who replaced Nugent at the Pavilion End.

In an attempt to hit Woods into his home village of Wargrave, Yousaf could only spoon a ball to Rishton at point. And when Akhtar edged Woods to Nugent at slip, Slough found themselves reeling on 70-4. Having helped Woods to his three early wickets, Singh soon joined the party by removing the dangerous Sher, Slough’s captain and perhaps only hope of truly rebuilding the innings. Having been adjudged lbw for only four, he was soon followed back to the pavilion by Kazim, Woods’s fourth victim well-caught by Morris in the ring.

At lunch on 80-6 Slough became heavily reliant on Qureshi who, amongst the mayhem at the other end, moved serenely past his half-century and began to threaten after the break, with some impressive stroke play off all of Henley’s bowlers. However returning to the attack from the pavilion end, Singh found a way through leg-spinner Sulaiman before Rowe, whose spell from the Remenham Hill End proved vital for building pressure on Qureshi, dismissing Slough’s talisman lbw for 92 off 151 balls. His innings showed what was possible with some application, something that was lacking in Slough’s tail which capitulated to 157 all out off 60 overs – the last two wickets falling to Rowe, who had Haroon stumped by Williams, and Singh, having Akbar Raja caught by Afridi at square-leg.

Despite a talented attack, 157 was always going to be an uphill battle for Slough’s bowlers to defend and in pursuit of early wickets with attacking fields, the away side found themselves on the back foot from the outset.

The in-form partnership of Roberts and Rowe were quick to pounce on anything loose, both driving and pulling with freedom and trust in what was still a good pitch.

Despite the introduction of Berkshire man Raja into the attack, Henley’s openers did not let him settle and were quick to find boundaries both down the ground and square of the wicket.

The 100 partnership came up in good time, with both batsmen passing 50 and looking to knock the Slough target off without the loss of a wicket. Unfortunately Rowe found Louth at long on off the bowling of Yousaf, perhaps going for one too many boundaries.

This left the score on 134-1 as Woods entered the fray and along with skipper Roberts, the young left-hander made quick work of the remaining runs required. With one last languid drive for four past long-off Woods brought the run chase to an end in the 32nd over as Henley finished on 161-1. From the sidelines, you sensed this performance had been brewing over the past couple of weeks. However, having not needed to chase a score down this season yet, Henley would have been keen to make a statement that the side was capable of winning regardless of defending or chasing a score.

After the game Roberts said: “We were on it really from the outset. Despite not actually being particularly disciplined with the new ball, Woods, Singh and Rowe bowled exceptionally well in partnerships, allowing us to build pressure and create chances more often than in previous weeks.

“A score of 157 on that wicket was substantially under par, as the run chase then showed.”

With Tring next up, who are now top of the league, Roberts was quick to dispel any possibility of complacency, saying: “We will approach each game week-by-week now, focusing on our performances and letting these take care of the result.

“Tring are a good side, but we’re keen to get up there and repeat last year’s performance for sure.”