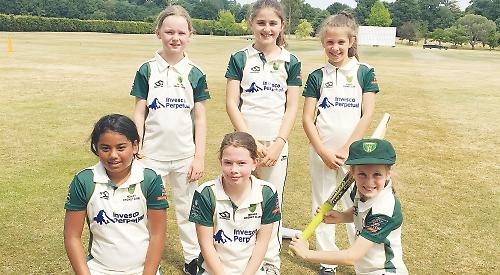 HENLEY GIRLS U10s overcame the hot conditions to win all three of their East Division festival matches at Finchampstead on Sunday.

In the first match Henley beat WARFIELD U10s by 19 runs. Henley put on 267-2 with Warfield putting on 248-2. Henley won by their second match against FINCHAMPSTEAD U10s by the same margin. Henley put on 286-3 while Finchampstead closed on 267-1.

The final match saw Henley beat ROYAL ASCOT U10s by 20 runs. Henley put on 268-2 with Royal Ascot closing on 248-4. During the festival Nancy Gillingham, Lily Bowlby, Holly Butlin, Lily Wildgoose and Riya Lambu all hit fours while Bowlby and Butlin also chipped in with a couple of sixes.

The bowling was tight in all three matches with maiden overs from Niamh Quinn, Nancy Gillingham, Holly Butlin and Riya Lambu. All the opposing teams played well but the Henley girls were too strong and worked together on their fielding and backing up. Wickets were taken by Bowlby, Lambu, Butlin and Gillingham.