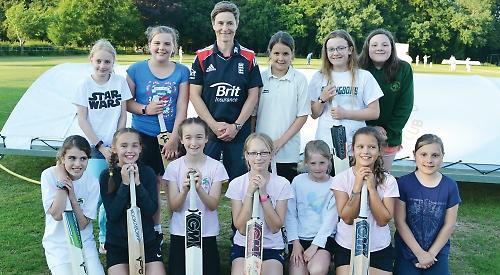 FORMER England cricketer Claire Taylor put the girls at Kidmore End Cricket Club through their paces at a training session.

The top order batsman represented England more than 150 times between 1998 and 2011 and was the first woman to be named Wisden’s cricketer of the year in 2009.

Her warm-up exercises enouraged the girls to use their cricket skills — footwork, fitness, flexibility and lots of throwing and catching.

The girls were then split into two groups for fielding drills and batting practice with Taylor passing on her expertise.

Jules Cook, head of girls’ cricket at the club, said: “Every girl received some personal coaching on their batting and all were feeling confident going into an energetic and noisy team contest at the end.

“There was no standing around in the field waiting for the ball to come to them or batsman waiting for their turn — every girl was ready to play their part in getting the opposition out, or getting the bat back for the next person in line after completing a run.

“It was a great way to keep everyone involved and put 100 per cent effort in at all times.

“It was such a great privilege to have Claire along to our training session. The girls loved every minute and were really inspired to meet a true legend of the women’s game.

“We are a small, yet enthusiastic bunch at Kidmore End and the girls definitely went away with smiles on their faces — and Claire’s signature on their bats.”