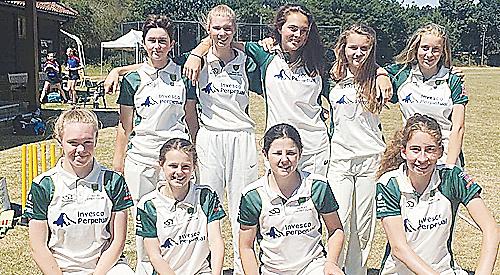 The home side won the toss and put Henley into bat with Nicola Lee and Lucy Beale opening. Beale lost her wicket in the first over to a straight one that nipped under her bat.

Eliza Stone joined Lee at the crease with the pair putting on a 50 partnership. The duo called clearly and ran sensibly until Stone was run out in the seventh over.

Lee was then joined by Jemma Swire Thompson and faced some accurate bowling but unfazed, Lee managed 10 boundaries and Swire Thompson seven as Henley piled on the runs. The pair played sensibly until the 15th over ticked by and then opened up, scoring at seven an over between the seventh and 15th overs and upping the rate to 10 an over in the last five.

Lee ended on 75 not out while Swire Thompson hit her first half century for the club as she ended on 52 not out as Henley closed on 172-2.

Maddie Bowsher opened the bowling with her reliable pace and accuracy. Bowsher conceded two runs off her first over and then took two wickets for three runs in her second. In the third over and Melton were on 17-2 with their number two and three both out for a duck. Bowsher then crowned her spell with a run out in the fifth over to leave the hosts on 27-3.

Lauren Hilditch bowled tightly at the other end with her second and third overs going for six runs while Ana Cauchi continued in a similar vein. Ceski Clarke, Sophie Jordan and Eliza Stone all followed suit, bowling accurately, frustrating Melton whose players struggled to get any proper contact of bat on ball. They ran the singles where they could, but as hard as they tried, Henley’s bowling restricted them to just a couple of boundaries.

By the 15th over, Melton were well behind the run rate putting on just 50 in 10 overs. Swire Thompson then came on and in her first over Lucy Beale was safe behind the stumps taking a catch off their number four. Swire Thompson was then rewarded with a second wicket, caught Lee in the 17th over.

With overs running out Melton managed 118-5 to leave Henley victorious in the semi-final. Henley will now face Hayes in Kent in the regional final.