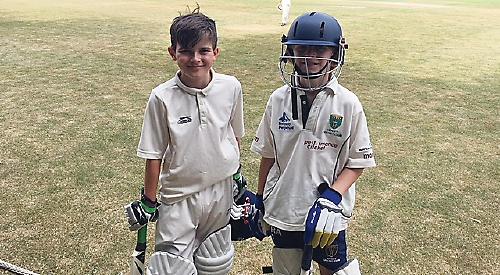 Captain Ben Horner won the toss and elected to bat. Opening batsmen Oliver Saunders and Ben Knight faced the onslaught of the Warborough bowlers early on as five wickets fell in the first eight overs.

The Warborough bowlers gave little away by way of extras with some neat bowling. However Henley’s Tom Atkinson who hit a fine 26, retired and came back in to face just one ball which he dispatched last ball of the innings for a four taking him to 30 and Henley to 98-9.

Horner opened the bowling and with his ninth delivery took the wicket of Warborough opener Conrad Morley for 0 with the help of a catch by Emerson Proctor.

When the skipper was bowling later in the innings Henley had high-scoring Charle Morley on 20 with a run out by Oliver Saunders.

When the game reached the final over, Warborough were on 91 needing just seven to draw or eight to win.

Arthur Schrier took his time and built up the pressure but Warborough scored five off his first three deliveries including one wide leaving them needing two to draw or three to win off the next four deliveries. However, Schrier delivered four dot balls to earn his side victory as Warborough closed on 96-7.