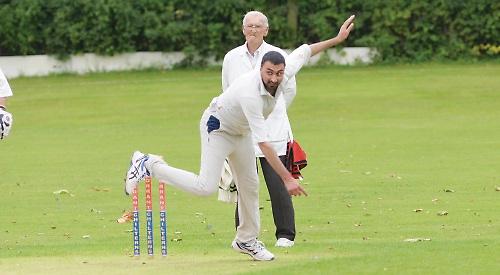 A superbly weighted innings from Dawkins saw him carry his bat from the second over — patient at first, then destructive as wickets tumbled around him.

Phil Ridgeway greeted his first ball with a leg side clip to the boundary, but fell in the third over bowled by skipper Richard Cole.

Shabob Riaz was his usual expansive self before getting a lifter that was taken by keeper Narraway. This soon became 27-3 as Simoes was cut down lbw. Imran Arshad square cut his first ball for four as a mini revival added 26 for the fourth wicket.

Hurley then lost four wickets for 10 runs facing humiliation on 63-7. Steve Taylor left a straight one to leave Hurley on 83-8 which signalled Dawkins to dramatically change gear. He reached his 50 with a square six as he and Jonathan Langlands added 58 in eight overs. Langlands played across the line once too often and was bowled and Ajmal Ali lasted eight balls as Hurley climbed to a defendable 150 on a wicket favouring bowling.

Hurley struck in the sixth over as Jain walked on an lbw appeal from Arshad. By the 10th over Emmbrook were 29-5 as Riaz and Arshad made a shambles of the home side’s reply.

Emmbrook made slow progress but wickets dried up as they edged to 67-6 before the change to Henry Graham. Bowling well within himself in the first over, the wicket responded with a shooter to bowl Patwardhan. Graham then followed up with two more wickets in successive overs.

Narraway was dropped at gully but then next ball repeated the shot only to be caught by Riaz. Cole then drove fiercely at cover where Riaz obliged a second time. Langlands finished the match as Howath skied to slip where Ridgeway completed his third catch.