First defeat of campaign knocks side off top spot 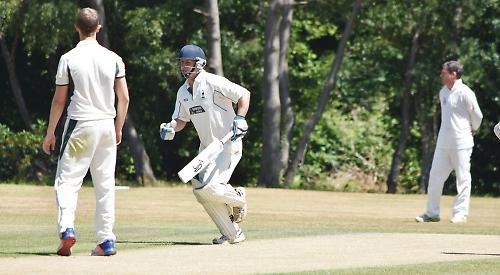 HARPSDEN were knocked off the top of the table after suffering their first defeat of the season at PENN AND TYLERS GREEN last Saturday.

Penn skipper Francis won the toss and elected to bat on a hot afternoon. Harpsden took the field and started well as Hancock took the wickets of Gupta and Mason, who were both caught in quick succession.

Birkett had Biswas trapped lbw for 23 with an in-swinging delivery leaving Penn and Tylers Green struggling at 40-3.

The introduction of Wright induced another quick fall of wickets, with the seamer removing first Lewis and then having Cockroft caught behind.

At 50-5 Penn appeared to be on the ropes. That was until Radford and Haumann came together for a rapid 80-run stand in the middle overs. The returning pair of Hancock and Wright eventually brought the partnership to a close as Radford was bowled by Hancock for 58.

Wright struck again but the Penn lower order refused to be cowed, taking advantage of some loose bowling as the fielding side began to wilt in the sweltering heat.

Lance (20), Tattersall (39 not out) and Francis (34 not out) all chipped in with some expansive hitting and by the 52 over point Penn had reached an imposing 242-8. Tom Hancock performed well with the ball taking 4-53 from his 15 overs.

The Harpsden innings got off to the worst possible start as Biswas, bowling with the old ball, had Ben Hancock caught in the first over for 4.

Franklin joined Imlay in the middle and the pair set about building a meaningful partnership, Imlay in particular taking advantage of any loose bowling on a dusty, spinning wicket. The opener fell for 29 as he was caught at mid-off from the bowling of Cockroft.

Skipper Whittaker arrived at the crease and struck several boundaries before being well caught by Wilson on the square leg boundary. Cockroft then proceeded to run through the Harpsden middle order as he claimed the wickets of Mitchell, Stevens and Tom Hancock in the space of a few overs.

Franklin finally fell for a gritty 58, caught and bowled off the bowling of Biswas. The pair of Penn spinners then proceeded in cleaning up the tail with Khaliq, Birkett and Paice all falling without troubling the scorers as Harpsden were bowled out for 136. The star men with the ball were undoubtably Biswas (3-40 from 13 overs) and Cockroft (7-54 from 13.1.)

The hosts won the toss and a huge score looked on the cards as Jamie Sharrock and Dan Hayden took 18 off the opening two overs on a flat Peppard Common wicket.

However, that was as good as it got for the hosts as Hayden was caught at cover, Don Townsin, debutant Scott Harris and Sharrock all edged behind, and Senthil Muniyasamy skied a pull as the hosts imploded.

Josh Perkins was trapped lbw, Sam Fooks edged behind and burly all-rounder Alfie Clifton was caught at point as Peppard Stoke Row fell to 95-8, before skipper Richard Ashton was caught at deep mid wicket off the bowling of leg spinner Lewis Thompson.

When Dion Sampson edged to first slip first ball Peppard Stoke Row had been knocked over for 97.

In credit to the home side Harris (3-42) and Clifton (2-46) – the former benefitting from an impressive catch from Sharrock at short mid wicket and the latter earning one from a Hayden second-slip snaffle – made the visitors work, but Ley Hill secured a victory in 18.2 overs.

After the game skipper Ashton said: “Halfway through the season we’ve done far better than I thought we would and hopefully we’ll put something together on Saturday against a really dangerous Ruislip Victoria side.”