Reddy bludgeons century as Wargrave get back on track 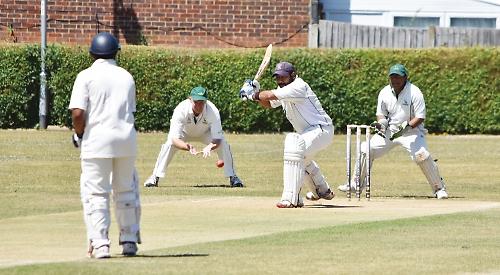 HENLEY 2nds held out to claim a draw from their home Division 1 match with GERRARDS CROSS last Saturday.

Having won the toss Henley put the visitors into bat first at the Brakspear Ground. Opener Jasraj Grewal was dismissed for 5 to leave Gerrards Cross on 27-1. The visitors hit back with two large partnerships to see their side end on 271-6 with Feroz Baig top scoring with 65 while Zia Ashraf took 3-86 for the hosts.

In reply Henley got off to a good start with Tom Oldershaw and Ashraf putting on 141 for the first wicket. When Oldershaw fell for 89, bowled Fyfe, caught Denning, Ashraf put on a further 37 runs with Will Legg before he was dismissed, caught Morrison off Baig. This left the score on 178-2 but this soon became 227-8 as Baig and Denning both took four wickets each for the visitors.

Simon Wheeler was bowled off the last ball of the match by Denning to leave Henley on 253-9.

In Division 2A KIDMORE END had the better of the draw at WINDSOR.

Kidmore interim skipper Leonard won the toss and decided to bat due to the scorching temperatures. Openers Easton and the returning Abid Ul-Wahab had the task of setting a platform.

Both batsmen took blows to the body and a couple of run out chances were nearly taken. Hartridge created the first major chance as Ul-Wahab was deceived and the ball lobbed straight up in the air but no Windsor player was able to take the catch.

Ul-Wahab went on to make 103 off 91 before he was the first victim of Lazarczuk off spin bowling, his innings contained 17 fours and two sixes.

The role of Easton (51) in the opening stand of 142 was crucial as he was content just to restrain himself and give his partner the strike before unleashing a flurry of boundaries when his partner began to tire.

Kidmore End then lost their next six wickets for 36 runs going from 142-1 to 178-7 as Burningham, Leonard, Leach and Bodeker fell to the spin of Lazarczuk and Easton and Ashby were victims to seamer Hall. Sheldon and Crawford rebuilt with a partnership of 33, Crawford took the aggressive approach for 22 while his partner looked to bat time and make the bowlers bowl to his scoring areas. Crawford and Rusjan joined the collection of their teammates trapped by Lazarczuk as they became his sixth and seventh victims. Kidmore finished on 212 all out in the 49th over.

The old ball was taken with the view that the Kidmore spinning trio of Ashby (4-53), Crawford and Faroqi would appreciate using a worn ball. The start was not ideal as Windsor cruised to 26-0 relatively scare-free. Ashby got the big wicket of Windsor skipper Baumgartner caught well by Bodeker at point. Ashby followed this by removing fellow opener Hawkes, leaving the score 30-2.

A partnership between Weston and Carlton of 32 put the breaks on the Kidmore End surge. Crawford Switched ends and got the breakthrough, Carlton caught behind off an under edge by Leonard.

Faroqi took the next scalp, again caught behind. The spinners were doing the damage with Crawford picking up another leaving the score at 81-5 but the ball was becoming so soft that it hardly moved off the pitch.

Windsor keeper Ambrose provided Weston with some much needed support as the pair put on 86 to change the game. The home team only required six an over with a small boundary one side and a lightening outfield.

The new ball had been taken in an effort to get a breakthrough. To start with this move backfired as Ambrose and Weston scored more freely. Ashby was the man again to get the big wicket as he trapped Ambrose lbw before bowling Lines shortly after.

The score was 171-7, the fall of two quick wickets resulted in a change of approach from the hosts as they proceeded to go for the draw. Faroqi had a number of close shouts for lbw and caught behind while Ashby beat the bat regularly. The game ended in a draw with Weston not out on 81.

FINCHAMPSTEAD 2nds amassed an imposing 284-4 against WARGRAVE in Division 2B with E Oliver (82) and M Keast (87) creating the strong platform and G Loveday and A Lezenbury providing the flourish at the end of the innings.

Wargrave, in reply, made a strong fist of it, and at 162-3 after 32 overs were in a good position to complete the run chase, but the loss of Mandip Sohi (35) and Neal Robinson (0) in consecutive balls made things difficult and they finished on 270-9.

With no limitation on bowling, two Finchampstead bowlers, A Hussain (19-0-123-7) and S Taylor (23-1- 111-1) almost bowled the entire innings, with Hussain’s seven wickets nearly winning it for the home side. Michael Cowdell held Wargrave’s innings together, top scoring with 91, and some meaty blows from Mark Firth created some excitement towards the end, but it wasn’t to be and the game ended in a draw.

HENLEY 3rds suffered their eight Division 4A defeat to remain bottom of the table after going down by five wickets against BOYNE HILL 2nds at Nettlebed.

Having won the toss and electing to bat first Henley were bowled out for 201 with P Gurung top scoring with 106. In reply B Mitchell took 5-70 for the hosts but this could not stop Boyne Hill from easing to 202-5 to secure the points.

WARGRAVE 2nds ran out 73-run winners in their Division 5B clash at home to BOYNE HILL 3rds.

Batting first, Wargrave’s Harry Reddy (134) and Kieran Lall (78) dominated proceedings. After losing two early wickets, Reddy and Lall patiently rebuilt the innings and accelerated towards the end to post an imposing total of 239-4, both losing their wickets shortly before the close.

In response Boyne Hill lost wickets at regular intervals with only Ashish Kapila and Guatam Bhanot contributing significantly. They were bowled out for 166 in 40 overs with spinners Emma Walker (6-0-16-3) and Harry Reddy (7-1-23-3) the chief wicket-takers. The strong bowling performance on a good batting wicket was backed up by some fine catching and ground fielding and was an important return to winning ways after a string of recent losses, putting Wargrave back into contention for the title.

KIDMORE END 2nds had to settle for a draw in their home Division 7A clash with WHITE WALTHAM 2nds.

The visitors won the toss and elected to bat first. Kidmore’s in form opening bowler Azhar Udeen opened up with a fast, accurate spell of bowling beating both Waltham’s opening batsman repeatedly and was unfortunate not to get a wicket.

To get the initial breakthrough it took the canny bowling of Richard Denton who got the outside edge of Hugh Gillen-Toon and bowling well in tandem with AJ Raina the run rate slowed dramatically with Raina also getting Andy Parham who chipped to mid wicket where Stefan Gordon took a low catch.

The Waltham innings stuttered as Kidmore were able to slow down the run rate and with good tight bowling and field placements and it took 50 apiece from Joe Nunn and John Mahoney to get Waltham up to 252-9 from their allotted 52 overs. All of the Kidmore bowlers put in good spells with the standout performance from Azhar Udeen who in 18 overs collected 5-61.

In reply Waltham opened with two spinners and the old ball as they tried to exploit any turn which was in the wicket and also put the home team under pressure and at 18-2 with Mike Salmon and Parham bowling well it looked like the visitors were setting themselves up for victory which was further looking likely as Kidmore lost a further wicket with the score on 33.

The home side started to gain momentum as Mark New and Stefan Gordon put on 58 for the fourth wicket with New in the process getting to his half century and it was only the run out of Gordon which stopped the partnership.

Again Kidmore lost two quick wickets and at 97-5 the winning total of 253 looked a long way off. Julian Berry joined New at the wicket and the two soaked up pressure with sensible shot selection and punishing the bad ball they combined to add 73 for the sixth wicket. However, with the new ball being taken the Waltham bowlers of Ellis and Thomas made life difficult to score and with Ellis prizing Berry via his inside edge with the score on 170 with 11 overs remaining.

Denton joined New and the two left-handers put on an unbroken partnership of 42 taking Kidmore to maximum batting points and New also completed his century finishing on 103 not out as Kidmore finished their allotted 48 overs on 212-6 and the game ended in a draw.

In Division 8A, WARGRAVE 3rds ran out 124-run winners against hosts HAYES 3rds.

Joe Warren’s superb 55 backed up by Michael Hattey’s robust 41 rescued Wargrave’s innings and enabled them to reach 195 before being bowled out in 37 overs. The innings of Hayes never developed momentum as they were bowled out for 71.

In Division 9A KIDMORE END 3rds went down to a six-wicket defeat at YATELEY 3rds.

Having won the toss and electing to bat first Kidmore End were dismissed for 184 with Todd Butler top scoring with 60. In reply Yateley eased to 185-4.