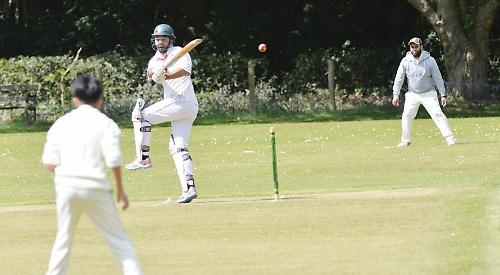 Condemned to fielding in the heat on a fast scoring ground the visitors soon had Berks County Sports in trouble with left arm swing bowler Alex Podolski clean bowling three out of the first five batsmen.

Umar Akram redressed the balance with a well-judged 72 but all-rounder Sushant Agarwal chipped in with three further wickets and Ashish Talreja benefited from two fine catches, one in the deep from Vikas Chib and an outstanding effort at slip from Jim Warren.

The hosts’ score of 167 was well short of a good total as the Checkendon top order proceeded to demonstrate.

Matt Heslop led the way with an undefeated 62 supported by Jim Warren in a second wicket partnership of 60 and by Sam Arrowsmith in an unbroken stand of 65 which saw the visitors cruise home in 27.2 overs with seven wickets in hand.

With a mounting injury list, WOODCOTE’S batting frailties resurfaced as they fell to a 32-run defeat in their home match with MORTIMER WEST END.

Sam Tucker, making his first appearance of the season, bowled a fine opening spell of 11 consecutive overs with temperatures close to 30 degrees.

Spin twins, James Worsfold and Pete Roberts then bowled the home side into a good position for winning the match. Ryan Lennard was in fine form behind the stumps taking four catches, a stumping and a run out without conceding a bye.

However, Woodcote lost early wickets to the accurate bowling of Andy Johnson and when Mortimer West End took the new ball the match was soon brought to an end. Only number 10 batsman Jonny Aldridge put up any real resistance.

Elsewhere in the division GORING crashed to a seven wicket defeat at home to SANDHURST.

Batting first the hosts put on 181-8 with Parvesh Dabra top scoring with 67. Other notable contributions came from number eight batsman Lewis Instrona with 43 and George Taylor with 20. In reply the visitors put on 185-3 to win the match in 34.4 overs with James Birch top scoring with 79. Dabra took a caught and bowled for Goring, Pete Slade dismissed a player lbw while a third wicket came courtesy of a run out.

Dominic Hall made his second consecutive half century as PEPPARD STOKE ROW 2nds returned to form with a winning draw at WALTHAM ST LAWRENCE in Division 1.

Hall’s 52 was matched by Olly Turtle and with Andy Watts (45) and Gerry Bacon (44) also among the runs, the visitors were able to amass an impressive 271-8 from their 45 overs.

In reply, captain Riaan Ackerman (2-66) and Turtle (2-32) exerted a useful degree of pressure from the outset, and 13-year-old James Watts then grabbed 2-28 late on as the home side were restricted to 236-8.

An heroic effort from a nine-man PEPPARD STOKE ROW 3rds was not enough to stop them falling victim to a 117-run defeat at Division 2 leaders SHINFIELD 2nds.

Opening the batting Lee (21) and his son George (20) looked good, and with May showing his class with 39, Peppard Stoke Row never gave up, but a trio of lbw decisions proved crucial in the away side being dismissed for 129.