Rowe and Woods combine to lift side to second spot 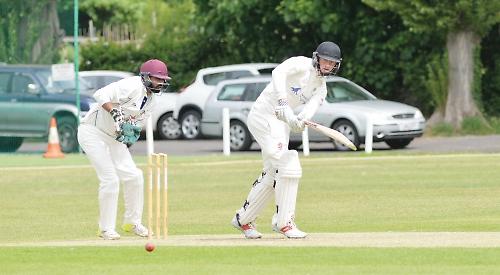 In pursuit of Tring’s 236 off their allotted 64 overs, both men continued to demonstrate the capability of Henley’s batting line-up, mixing patience with panache and reaching their target with 10 overs to spare.

The result moves Henley up into second place of the Home Counties Premier League at the halfway mark, reflecting the side’s continual improvements over the last five weeks.

Despite a hot and dry day at Tring, having won the toss, Henley skipper Michael Roberts elected to bowl, trusting his side’s much vaunted batting line-up to chase down whatever was set by the home side.

In the early stages, it was hard to tell whether this was a good or a bad decision, as both Tring openers Dixon and Woodland began aggressively and found boundaries relatively frequently. However, with the wicket misbehaving a little, it soon became apparent that putting enough balls in the right areas would reap the rewards and once Nugent and Afridi both found their rhythm, wickets began to fall.

Nugent struck first, finding the edge of Woodland’s bat, before Afridi did the same to Dixon, both men caught by keeper Williams. Tring skipper Macdonell and O’Neill then both fell in quick succession, the former caught behind again by Williams, whilst the latter could do little about a fine delivery from Afridi which caught the off stump. This left Tring on 62-4 and staring down the barrel of a low score.

Payne dug in before lunch and although he lost overseas player David Brent, he managed to build a useful partnership with Harris which denied Henley complete control at the lunch break.

Scoring after lunch was slow, which although at the time could have been perceived as a good call with the wicket still offering the bowlers plenty of assistance, would ultimately harm the home team in the long run.

Singh eventually bowled Harris for 31, before having Choudhry caught well by Brock at cover, leaving Tring on 144-7. Criddle joined Payne and both continued to play defensively up until the last eight overs when both batters began to show some intent for the first time. Both went after the spin and showed what could be done when playing with a dose of aggression. Taking on the spin of Singh and Rowe, they brought up the 200 before finishing on 236 after some lusty blows off Rishton towards the end of the innings.

Henley will have been a little disappointed to have leaked as many runs as they did towards the end of the innings, but would have been pleased to see what was possible on a wicket which had threatened to produce a low scoring affair earlier in the day.

The defending champions’ response did not get off to the best of starts, as Roberts was bowled by a seaming delivery off Brent, leaving the visitors on 8-1 off three overs.

This would be the last piece of satisfaction for Tring, as Rowe and Woods went to work. The latter began aggressively, finding the boundary with ease and putting pressure on the Tring attack from the outset. Rowe played the supporting role, and although found the going a little more challenging to start with, played with composure and rotated the strike with ease to give his more aggressive partner the share of the strike early on.

At tea, Henley had passed the 100 mark, with both batters settling into a match-winning partnership.

The break did little for the home side, as both their seamers and spinners found little purchase out of what was now a seemingly docile pitch. Both Woods and Rowe were by now well into their stride and neither looked as though they were going to be got out – it was a matter of how much they wanted to bring the game home.

Woods was the first to bring up his 100, with a majestically timed drive through the covers. This was the Berkshire man’s first league 100 for the club. Buoyed on by his partner, Rowe then put the hammer down and with some boundary hitting and was able to bring up his first ton of the league season, finishing the game with a pull shot for six.

After the game the Henley skipper was understandably delighted with the result. Roberts said: “For the boys to go and chase Tring’s score without a single chance being offered was truly special.

“I don’t know whether it’s a record, but it has to be close. Both Matt and Euan played exceptionally well.”

With the league now at the halfway mark, Henley know there is still plenty of work to be done, as they endeavour to hunt down leaders Aston Rowant.

Roberts added: “What is exciting is that we’re probably still a little off our best, especially with the ball and from a tactical perspective too. If we can tune our skills and game plans in the field and with the ball just a fraction, we’ll really start to put some performances together which reflect the group’s potential.”

Henley are away to Banbury tomorrow (Saturday), with an 11am start.