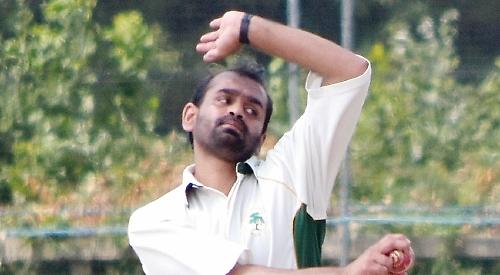 HENLEY 2nds were well beaten by FALKLAND in their Division 1 clash on Saturday.

They lost seven batsmen for just 19 runs, two without scoring, having been put into bat by the visitors.

Opener Ziafat Ashraf, with 39 runs off 50 balls, and Zac Jones, with 40 runs off 31 balls, were the only batsmen to show some grit as Henley limped to 155 all out.

Saad Altaf had got the visitors off to a good start, removing opener Matt Dalrymple leg before wicket for five runs and number three, Liam Hilditch, without troubling the scorers on his way to three wickets for 27 runs off his 14 overs.

But it was Khalid Zafar Malik who was the tormentor in chief as he tore through the middle and lower order claiming five wickets for 57 runs off his 15 overs.

In reply, Ashraf picked up opener Will Langmead leg before wicket after he notched 45 runs and then Kieran Wood, who was caught by Charlie Holmewood, for a four-ball duck.

But Falkland reached the required total with ease. Jim Ettridge was the only other casualty, hitting 35 runs before being caught by Chris Ellison off the bowling of Sean Taylor.

In Division 2A, the toss was always going to be crucial in the match between KIDMORE END and MARLOW.

A reduced in size outfield, baking hot sun and oppressive mid-afternoon heat, made batting first the obvious call. But, unfortunately for Kidmore’s captain, James Frost lost the toss and his side were put into the field.

Hosts Marlow raced away as the hard new ball barely required touching before flying to the boundary.

Spin bowlers Ashby and Crawford were brought on to bowl with haste and they managed to slow down the rate of scoring. Ashby then struck first, bowling Nawaz for 31 runs.

Barney Hogg with 47 runs from 71 balls, Nick Paskins with 58 runs from 54 balls and Graeme Paskins with 30 runs off 40 deliveries all batted intelligently laying foundations for the lower order to attack freely.

With the small shape of the pitch and trying conditions in the field it became very testing for the Kidmore bowlers to maintain their discipline but the fielding side stuck at their task.

However, no bowler was able to keep the run rate at less than four runs an over, allowing Marlow to finish on 292-6, declaring on 49 overs, giving themselves a few extra overs to bowl at the visitors.

Whilst the pitch had not changed in its nature, fielding second was done in cooler conditions.

Kidmore’s batsmen had to deal with tired legs and scoreboard pressure and this proved too much. Their innings never really got going as Marlow picked up wickets at regular intervals.

Kidmore’s largest run partnership was 48 between Crawford and Leonard.

There were some good innings but no one was able to go on and make a big individual score. This was probably due to some accurate bowling and also the pressure of having to keep up with the scoring rate.

This pressure would lead to loose shots as batsmen tried to prevent the required run rate from getting beyond reach.

Leonard played a fine innings for 49 in which he played late cuts, pull shots and sweep shots to keep scoring his runs.

He had a good partnership with Crawford who used his height to drive forcibly and aggressively and hit two sixes in one over before falling for 25 runs. Alas no batsmen could fully get to grips with the situation and the game came down to the last few batsmen having to survive 15 overs.

Frost held on steadfastly and he was supported well by Faroqi for a while and then Tom Wilkinson. Frost and Wilkinson batted together for more than 10 overs.

The game went down to the last over but, incredibly for Marlow and despairingly for Kidmore End, Wilkinson was dismissed on the last ball of the innings.

Marlow were jubilant, Kidmore crestfallen. The extra few overs Marlow had gained from declaring proved crucial in the end as Marlow won on the last ball by 142 runs.

HENLEY 3rds won the toss and elected to bat in their Division 4A clash against NEWBURY but were on the wrong end of a heavy defeat. They made 158 runs within 41 overs. R Stone with 46 runs and C Thomas with 31 runs were their top-scorers.

Few other batsmen put up much of a fight as bowlers Anstey, with 5-62 and Mills with 4-46 tore through the batting line-up.

Anstey then starred with the bat as he made 71 as Newbury reached their target within 26 overs for the loss of just one wicket.

In Division 5B, an unbeaten WARGRAVE 2nds opening partnership between JJ Harris (102, not out) and Luke Taylor (55, not out) in 22 overs made short work of SONNING 2nds’s total.

The visitors had won the toss and chose to bat and were steady with S Mankey (87) the only significant contributor.

But when he was out to the first ball after the tea break, Sonning’s innings petered out to 179-9 with Arul Appavoo (4-37) and K Graham (3-45) taking the bulk of the wickets. The total was never going to be enough on a good batting surface and Harris and Taylor were in no mood to hang around.

In Division 7A, KIDMORE END 2nds beat YATELEY 2nds in a high-scoring match at the Gallowstree Common ground.

With a flat pitch and a fast outfield it was not surprising that, having won the toss, Yateley decided to bat first.

Kidmore’s bowlers bowled well at the start but as soon as the ball beat the infield it more often than not went to the boundary.

Yateley’s top three batsmen all made half-centuries with John Howells out first for 50 with the score on 104, Harry Maxfield and Scott Gore then combined for a 50-run partnership before Maxfield was bamboozled by a Tom Sheldon leg-spinner and with Gregor Hearn effecting a smart stumping.

Gore then was joined by Yateley skipper Chris Petts before Petts was dismissed for 24 leg before wicket to Assad Ul Haq with the score on 227-3. In the 41st over, Gore then holed out two overs later for 79 and Ul Haq claimed another wicket by clean bowling Usman Shisodia with the score on 264-5.

A further 17 runs were added before Yateley declared in the 49th over with the score on 281. This left Kidmore End 51 overs to achieve a winning score of 282.

Kidmore started brightly as openers Chris Pigden and Mark New added 46 off the first 10 overs before New was dismissed for 26 caught behind off Andre Pienaar.

Sheldon then joined Pigden and they put on 24 before Pigden was caught at mid-off for 38 trying to go over the top. Sheldon was dismissed soon after as he plinked to mid-off also leaving Kidmore on 91-3 in the 19th over.

Gregor Hearn and Stefan Gordon then combined in an 111-run partnership from 11 overs with both playing shots all around the ground with Hearn hitting maximums and Gordon playing some delightful drives before Hearn was clean bowled for 78 with the score on 202.

Azhar Udeen and Gordon added 78 runs in eight overs before Udeen was stumped for 45 going for another big hit into the woods.

The partnership then saw Gordon reach his half-century and carried his bat through for 62 not out and Luke Gray hit a boundary to win the game.

In Division 8A BOYNE HILL 4ths elected to bat against WARGRAVE 3rds and accumulated 260 runs for the loss of eight wickets from their 40 overs.

After the break, Wargrave lost four early wickets but they fought back with 13-year-old Sravan Konidena scoring 112, assisted by Christopher Hattey (47) and Michael Hattey (42, not out) at the other end.

Konidena was out stumped shortly before the close but his innings was enough to help Wargrave succeed in the run chase with five balls to spare.

KIDMORE END 3rds fell short in their run chase against WOKINGHAM 5ths in Division 9A.

The visitors raced to 77 before losing their first wicket but more followed off the bowling of Hedley Ruegg, Matthew Stitt-Bouwer and Todd Butler.

Prasad Kulkarni stabilised the innings, hitting 64 not out, and bringing the total to 239 for the loss of five wickets from their 40 overs.

In reply, Kidmore End had a solid start with Nathan Ruegg hitting 65 runs before being bowled by Kulkarni. Rusjan, his opening partner remained in place for the entire innings, ending a single away from a half-century.

After losing three more wickets it was left to Simon Berry to accompany Rusjan to the end but they could not pick up the run rate and so Kidmore finished 48 runs behind.