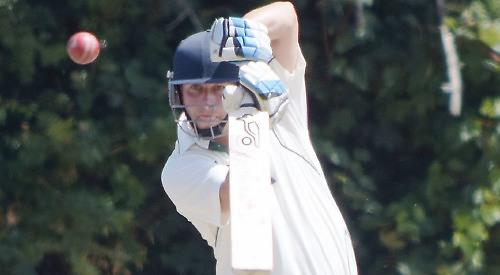 PEPPARD STOKE ROW’s captain hailed the “ultimate team man” after a Sam Fooks swing-bowling masterclass ushered his side to a five-wicket win at home to
RUISLIP VICTORIA in the Championship.

Fooks had gone two weeks without a bowl as David Williams, Alfie Clifton and Scott Harris had done damage against Braywood and Ley Hill, but the experienced all-rounder showed his class with a seven-wicket haul.

Richard Ashton chose to bowl after winning the toss and Harris (3-37 from 12 overs) was in fine form to account for the Victorians’ top order. On a flat Peppard Common track the game then turned into the Fooks show — Ruislip unable to deal with the moving ball as Ashton held four catches at first slip and Jamie Sharrock one at second slip.

With Michael Chard enacting a stumping and Senthil Muniyasamy grabbing one at backward point, Ruislip had been dismissed for 120 as Fooks ended with figures of 7-36.

However, Peppard’s reply began in disastrous fashion as they crashed to 18-4, but 17-year-old Dan Bacon stabilised the innings with a knock of 42 runs before being dismissed. His knock aligned with an unbeaten 42 from Harris which were enough to break the back of the run chase, and Peppard were able to knock the remaining runs with relative ease.

The result lifted Peppard to third in the table. Speaking after the game, Ashton said: “I cannot speak highly enough of Fooksy. Early in the season he was taking wickets with the new ball and today he’s done it with the old one. Whatever you ask of him he does and he’s just the ultimate team man — an absolute pleasure to skipper.

“Scott was also exceptional and with Dan playing a hopefully career-defining innings, this was a great result against a dangerous side.”

Elsewhere, HARPSDEN’S fixture away at CHALFONT ST GILES was called off after the visitors were unable to field a team.