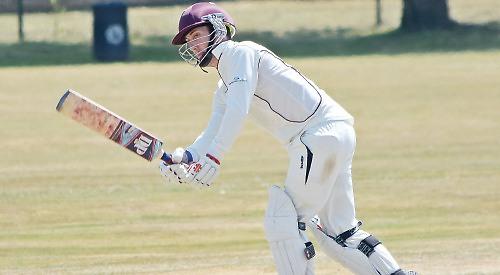 AN unbeaten century from Paul Knox helped WOODCOTE chase down FARLEY HILL in the Premier Division inside 30 overs.

His 106 not out included five sixes and 12 fours in his innings on what was a perfect batting pitch to seal a seven-wicket win.

This 70-over match started early and Farley Hill put themselves in a strong position with openers Duncan Greeff and Michael Sheridan sharing an stand of 93 runs.

But both fell to Peter Roberts, with Greeff caught by Ben Danks two runs short of his half-century and Sheridan stumped by Ryan Lennard for 52.

Ali Jalil, who was in at four, showed good resistence to remain unbeaten on 34 not out as Farley Hill posted 174 in their innings.

In reply, Knox made short work of the opposition bowlers and was ably assisted by Lennard and Brouard, who picked up 25 and 21 runs, respectively, as Woodcote reached their target with the loss of three wickets.

Elsewhere in the division, bowler Peter Slade hit a half-century for GORING but it was not enough for his side to avoid defeat against IBIS MAPLEDURHAM.

The hosts won the toss and elected to bat but lost both their openers early on. Andy Benning was caught leg before wicket for two runs, off the bowling of Richard Pilkington, while Chris Walsh suffered the same fate to Lewis Hart for one run.

Nikhil Kulkarni then picked up the pace, hitting 30 runs off 45 balls before being caught by Peter Weston off the bowling of Ankit Singh. Goring then lost their next four wickets for just one run with Pilkington and Hart picking up another two wickets each.

This brought Nirmal Singh and Slade to the crease and Singh hit 43 runs off 46 balls before being caught by Jonathan Beverley, off Pilkington, who claimed his fourth victim and ended a 10th wicket partnership of 95, a record for the division.

Slade carried his bat, ending up unbeaten on 65, off 75 balls. ably assisted by Bally Mehla, who scored 33 runs off 49 deliveries before being bowled by Singh to bring the fightback to a close.

In reply, Goring started well as Singh was run out for 19 runs and his opening partner lasted just three balls as he was caught by Chris Walsh off the bowling of Andy Benning without scoring.

But this brought together David Drury and Pilkington and between them they knocked off the majority of the runs, hitting 84 and 64 runs, respectively.

Drury eventually fell caught and bowled to Adam Ellis while Pilkington was caught by Benning off the bowling of Parvesh Dabra.

Matthew Jones hit 11 runs off 16 balls to put his side within touching distance of Goring before being bowled by Benning. Dabra then caught Steven Brackley leg before wicket when facing his first ball.

This sparked a bit of panic in the visitors as they also lost their next two wickets without scoring a run with Benning picking up a run out and a clean bowled.

It was then left to tail-enders Joe Richardson and Sinith Chandran to see their side home.

In Division 1, under-15 Ed Atkinson top scored with 46 as PEPPARD STOKE ROW 2nds improved their league survival hopes with a 140-run hammering of home side
HAWLEY.

Atkinson led the way after opening the batting and, with Gerry Bacon also adding 42, Peppard declared on 210-6 after 31 overs.

Atkinson’s school friends Ollie and Jake Sedgwick bagged a wicket apiece before Olly Nicholson (5-7) got to work and Hawley were dismissed for just 70.

In Division 2, WELFORD PARK 2nds held on by the skin of their teeth against PEPPARD STOKE ROW 3rds and held on to a winning draw.