Henley settle for draw as top order fail to kick on 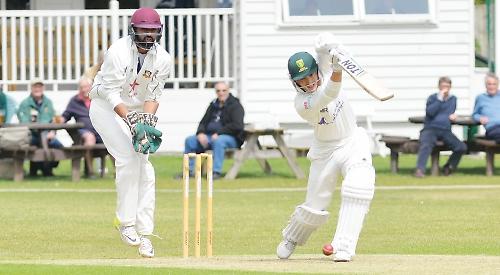 HENLEY could only muster a draw against BANBURY as their top order failed to replicate the performance of recent weeks.

Two brilliant hundreds from young Ollie Clarke and overseas Qaasim Adams kept Henley’s bowlers at bay as they reached 246-5 off their 64 overs.

But the defending champions could only muster one half century in reply whilst stuttering to 203-8 off their 56 overs.

The result leaves Henley in fourth spot with some work to do if they are to retain their title, with leaders Aston Rowant 33 points ahead.

After winning the toss on a pitch that looked like it could either be the flattest of the season or a complete minefield, Henley skipper Michael Roberts decided to bowl, backing his team’s batting line-up to chase whatever Banbury would set.

The decision looked justified relatively quickly, as Nugent bowled Captain Sabin for three with a ball which hit middle stump after the batsman decided to leave it.

Shortly after, Nugent had stalwart Haupt who, in quite a farcical turn of events, managed to run himself out going for a single which was never on.

This left the home side on 9-2 and for the remainder of the morning session, Henley bowled with patience and accuracy to cause as much playing and missing as you are likely to see at this level without a wicket falling. Whilst the ball was still hard, the pitch undoubtedly suited the bowlers and, if anything, perhaps caused a little too much movement as both Adams and Clarke battled through to remain unbeaten at the lunch break.

On the resumption of play, Henley mixed the seamers and spinners as they looked to control the game and create wickets through being patient and letting the pitch do the work. But this tactic, however, was met with some brilliant batting on an improving pitch, as Adams looked to be the aggressor with Clarke nurdling the ball around and finding the boundary when the opportunity presented itself. Henley’s attack began to look a little tired despite their best efforts, providing a few too many scoring opportunities which prevented any pressure to be built. Adams was the first to pass the 100 mark, celebrating in style, before then being dismissed by Nugent, caught by Roberts at midwicket. The breakthrough brought a match-defining 216-run partnership to an end, however did not prevent youngster Clarke from going on and getting a well-deserved 104*. Afridi did manage to remove Hill, well-caught by keeper Williams, and run out Briggs before the innings came to an end, frustratingly highlighting the lack of quality with the bat that was left in Banbury’s hutch.

Nonetheless, with the wicket improving and a strong batting line up lying in wait, despite missing Messrs Rowe and Barnes, Henley would have been confident of reaching Banbury’s target. The response started well, with Oldershaw in particular looking to play aggressively to put the Banbury bowlers off their lengths. However, the away side then lost two wickets in three balls. Oldershaw nicked a good ball from Taylor to Adams at slip, before last week’s century-maker Woods played too early on a ball which held up on the pitch, hitting a return catch to Taylor to be dismissed for 2. This brought Morris to the crease, who imposed himself on the fixture quickly with some brilliant strokeplay, finding the boundary with ease as Henley continued to go above the required run rate. The introduction of spin did little to slow the rate, as Green was not allowed to settle by either Morris or Roberts, with the latter playing with a particular intent against the spin. Both batters looked set to carry the away team into a comfortable position at tea, however Wright managed to find a way through Morris’ defences to bowl the Berkshire man for a quickfire 41.

On the resumption of play, Rishton was quickly sent back to the pavilion by Adams, bowled for a duck leaving Henley on 84-4. This brought Mikey Williams to the crease who along with his skipper, began to rebuild the innings. Both continued to pick off the bad ball and rotate the strike effectively, ensuring Banbury couldn’t get a proper foothold on the game despite their early successes. Roberts brought up a patient half century however was out very softly not long after, caught and bowled by Clarke, leaving Henley needing 100 with around 20 overs left. Legg came and went, allowing Brock to slowly rebuild with Williams who was continuing to play quite brilliantly despite wickets falling around him. The pair put on 50, bringing the score to just shy of 200, when Williams was adjudged LBW for 49 off the bowling of Adams. When Afridi was then bowled by Green the following over, at eight wickets down it was a matter of guaranteeing that Henley took something out of the game. Thus Nugent and Brock shut-up-shop and carefully played out the last 5 overs without mishap, ensuring a share of the spoils.

The result will have undoubtedly frustrated Henley, especially in the knowledge that if they managed to open up an end, Banbury’s innings would have likely been concluded much earlier in the day. However credit must go to Adams and Clarke for how they played, as mentioned by Roberts at the close of play: “It’s certainly an irritating result, as we ought to have chased 246, however Clarke and Adams played extremely well. We’ll have to look back and see what we could have done differently with the ball, but ultimately our batting display let us down with the guys getting in, including myself, not capitalising on starts.”