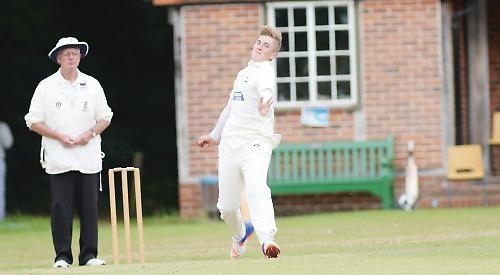 PEPPARD STOKE ROW U15s’ unbeaten season came to a halt as they were beaten by six wickets at ROYAL ASCOT U15s in their County Cup final on Friday night.

A 10-match winning streak was ended despite the best efforts of an extremely talented group who have the potential to take the club forward in the years to come.

Liam Hilditch top scored with 30, but with Daniel Watts (19) and Ed Bruun (10) the only other players to reach double figures, Peppard Stoke Row were left with an underpar 106-7 from their 20 overs.

Ascot paced their chase to perfection despite the best efforts of Owen Simmons (1-13 from four overs) and Archie Malcolm (2-16), and once again the elusive silverware fell short of Peppard Stoke Row.

Having won their Western Section of the league, Peppard Stoke Row will however, have the chance to gain redemption when they tackle the Eastern Division runners-up before a potential final at Slough Cricket Club on September 3.

Jarryd Wallace blasted 50 from just 15 balls as PEPPARD STOKE ROW U17s made it two wins from two against WOKINGHAM U17s.

The Berkshire paceman – who made his minor counties debut against Wiltshire last Sunday – helped Sam Kimber out in filling the side before producing a match-winning performance.

In reply, Manas Mathapati retired at 50, but the Peppard Stoke Row bowling attack proved too strong, Nathan May grabbing 3-13 and Wallace 2-11 as the Oaks were held to 145-6.

A disappointing batting collapse from PEPPARD STOKE ROW U19s proved costly in their three-run defeat to EMMBROOK AND BEARWOOD.

Seamers Will Atkinson (2-16) and Alfie Burnett (2-19) had bowled the hosts into a good position as they knocked the Bears over for 106, but a lack of experience – save for Jarryd Wallace’s 36 – ultimately proved costly as the hosts were bowled out for 103.