Big-hitting Lubbock helps side gain their first win of campaign 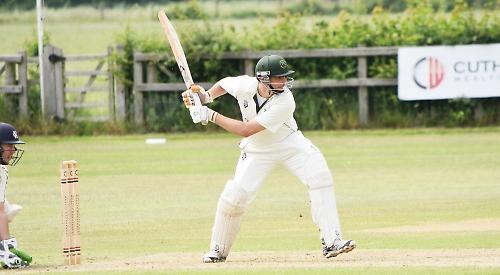 Having won the toss and electing to bat first the hosts posted 243-7 with Cameron Jacobsen taking 4-67 for the visitors.

In reply Henley found scoring runs hard to come by with Matt Dalrymple top scoring with 28 and only three other players making double figures as the visitors were bowled out for just 99 runs.

KIDMORE END ran out 134-run winners in their Division 2A home clash with OMT.

Winning an important toss at Gallowstree Common, James Frost’s team dictated the pace of the game from the start. Electing to bat first, young openers Jake Leach and Easton set about building a strong platform on an good batting track, that had both pace and bounce, yet little lateral movement for any medium-paced bowlers.

The Kidmore pair put on 90 runs for the first wicket with Leach being the aggressor as he played a number of cover drives and hard hit pull shots, one of which went for six over mid on. When he was out for 46 the speed of the run rate did not decline as Abid ul Wahab started with fine shots off from the back foot.

Once again Easton was happy to play second fiddle and together they scored a quick 30 runs before Easton was caught behind for 41. Leonard and ul Wahab now batted with intent and the diminutive pair dominated the bowlers.

Leonard played well off the back foot whilst ul Wahab advanced towards the bowlers striking them down the ground. Their century partnership was rapid. Ul Wahab scored at more than a run a ball as he struck 46 of his 52 runs in boundaries before being bowled.

Leonard continued in the same fashion pulling and working the ball into gaps. Kidmore then suffered a minor collapse as Leonard was caught for 69, Bodeker fell for 7 and Ingrams for 1 as OMT skipper, Kavir Vedd, the pick of the bowlers, finished with 5-64. Kidmore went from 254-3 to 256-6.

Crawford and Faroqi hit Kidmore back in the ascendency with aggressive striking of the ball. Faroqi blasted 32 from 16 balls with two big sixes and Crawford, whose lofted straight drive was the shot of the day, scored 24 from 23. This partnership of 46 took the team past 300. The Frost brothers finished the innings, James Frost hit a quick 12 from eight balls allowing his brother, Richard, to face one ball and declared with the team on 326-8.

This meant Kidmore had 50 overs to bowl out OMT and it did not take long for the spinners to weave a web of despair. The first three wickets were all victims of the fast hands of Leonard and the deceptive flight of Faroqi and Crawford in three stumpings, the fourth wicket was lbw to Faroqi, the fifth lbw to Crawford and OMT were 56-5.

The ball then became soft and the spinners became less effective. The new ball was taken and Frost, Udeen and Ingrams all worked hard. Despite chances being created they were not taken and Sohan Modi and John Walter batted well amassing the largest partnership of the game, 123.

Overs were eking away and Kidmore were struggling to get a breakthrough. Frost brought the spinners back on with 15 overs remaining in the hope that this would change the game. Initially nothing changed, but Faroqi floated a ball up and Modi (65) fell for the trap. The ball soared into the sky to Easton who took the key catch of the match.

This wicket triggered a monumental collapse as Faroqi took a caught and bowled moments later to remove Walter (56). Crawford took a nonchalant caught and bowled, then trapped the last batsman lbw.

WARGRAVE slipped to a home defeat against HIGH WYCOMBE 2nds in their Division 2B clash.

The wicket spun sharply and bounced, and apart from Matt Pugh (45) at the top of the order, it was some dogged batting towards the end of the innings from Andy Higgins (35) and Michael Burden (21) that brought High Wycombe up to a very defendable, and as it turned out, match-winning total.

Wargrave started the innings in the worst possible way, losing both openers for nought. Imran Malik (25) and Michael Cowdell (29) led a recovery of sorts, but when they departed, Wargrave couldn’t build partnerships, losing wickets at regular intervals, with spinners Conner Haddow (19-5-33-4) and Sam Parry (12.2-2-45-4) taking full advantage of the conditions and running through the middle and lower order to bowl Wargave out for 110.

HENLEY 3rds moved off the foot of the Division 4A table after recording their first win of the season at ROYAL ASCOT 2nds.

Henley, having won the toss and electing to bat first, put on 288-8 with Adam Lubbock, batting at seven, top scoring with 94. Lubbock’s innings included 13 fours and two sixes. Oliver Buckle chipped in with 55 while Ashley Hayden hit 49.

In reply the hosts were bowled out for 103 as Henley won by 185 runs with Luke Loveland, Nathan Hopkins, John Neville and Alex Harris-White all taking two wickets each.

Martin Smith claimed six wickets to secure a Division 5B victory for WARGRAVE 2nds against PURLEY 2nds having scored 237-8 declared in 48 overs after choosing to bat first.

The wicket always had something in it for the bowlers but the fast outfield ensured that runs could be scored and Wargrave complied steadily with captain Matt Townson (68) top scoring and Raj Senniappan (11-0-49-3) the pick of Purley’s bowlers.

Smith (18-5-31-6) took full advantage of the spin friendly wicket, bowling with patience and guile, and worked his way through the batting order to bowl Purley out for 145 in 43.3 overs.

In Division 7A KIDMORE END 2nds crashed to a seven wicket defeat at SULHAMSTEAD AND UFTON.

Kidmore won the toss and decided to bat first with the ambition of setting a large total. However, this plan didn’t work out due to some good bowling, well taken catches and unusual bounce on the wicket.

Kidmore found themselves on 9-2 then 37-4 with only captain Chris Pigden making 20 being the best performing batsman, Kidmore slipped into further trouble at 53-6 with Luke Gray’s dismissal for a well made 26.

The Kidmore lower order then started to rebuild and with some well selected shots as the tail wagged. With Jonny Abbott 45 not out, Assad Ul Haq 15 and Mike Jones 20 got the Kidmore score up to a much more respectable total of 172 all out in the 45th over.

Sulhamstead then had 54 overs to get the winning score of 173 and with Mike Jones bowling a hostile opening over which created a chance it was clear that this wouldn’t be an easy chase. With the score on 18 Jonny Abbott induced an outside edge off the dangerous Prakash who already had hit a large six and Mark New took a one-handed slip catch leaving the home side on 18-1.

Jones was involved in the next wicket as he induced a mistimed pull shot and Don Norman took a well judged catch at mid on. Jones then found the edge of Sulhamstead skipper Matt Burrows two balls later but unfortunately the chance went begging. Sulhamstead then started to take the initiative and a game-winning stand of 117 between Burrows and Al McKewan saw them almost home before Burrows was bowled by Jones for 62 with one run needed for victory. this was duly achieved the next ball and Kidmore were beaten by seven wickets.

A good all round performance by WARGRAVE 3rds resulted in a comfortable Division 8A victory against BAGSHOT 3rds to maintain their push for promotion.

Choosing to bat first, Wargrave amassed 249-7 from 40 overs with openers Oliver Newton (76) and Sam Warren (39) dominating and creating a strong foundation for Adit Rajeev (42) and Jonny Rimmer (39) to drive home the advantage. It was too much for Bagshot who were bowled out for 144 in 35 overs with Kevin Rapley (9-5-19-4) the chief destroyer.

KIDMORE END 3rds ran out 52 run winners in their Division 9A clash at home to READING 4ths.

Having won the toss and electing to bat first Kidmore End put on 240-8 with Todd Butler top scoring with 86 while Harry Ingram scored 40. In reply Reading were bowled out for 188 with Ankur Raina taking 3-36.