Stevens and Paice hold on for draw 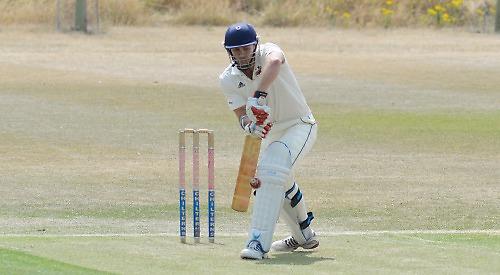 HARPSDEN’S title hopes took a setback as they held on to a draw in their home derby clash with PEPPARD STOKE ROW last Saturday.

Home skipper Christian Whittaker won the toss and elected to bowl on a grassy deck that appeared to offer some assistance to the seamers. Tom Hancock took the new ball and immediately struck, having Brett Everett caught behind for no score. Max Baker-Smith joined Harry Jordan at the crease and the pair acquitted themselves well, seeing the shine off the ball and pushing the score along nicely.

Jordan fell to an exceptional catch by Whittaker for 26 from the bowling of Hancock. Dan Hayden arrived at the crease and played several expansive shots before being caught behind off the bowling of Toby Stevens for 16.

Abdul Khaliq then bowled Senthil Muniyasamy and Baker-Smith was joined by Scott Harris in the middle. The pair accelerated the rate and, by the time Baker-Smith fell for a gritty 52 off the bowling of Stef Franklin Peppard were looking to accelerate through the last few overs. Harris fell to a good catch from Toby Stevens for 42 but the Peppard tail continued to wag with Richard Ashton, Mick Chard and Sam Fooks all chipping in to leave the visitors on 226-8 from their 52 overs.

The Harpsden innings got off to a faltering start, as both Sam Imlay and Franklin fell to inswinging deliveries from Harris early on. A good piece of work behind the stumps saw Ben Hancock stumped for 10 and it was left up to Whittaker and the experienced Will Stevens to rebuild the innings. The pair built a solid partnership and were beginning to accelerate when Whittaker miscued a straight drive only to be caught at cover for 35 off the bowling of Dion Sampson.

Stevens followed soon after, falling victim to a once in a season catch at first slip from Peppard skipper Ashton. Birkett arrived at the crease and looked solid, however wickets kept falling at the other end as first Tom Hancock, then Johnny Wright fell lbw to the bowling of Sampson and Harris respectively.

Adam Birkett followed shortly after and, as Khaliq was bowled by Sampson it was left to the last wicket pair of Toby Stevens and James Paice to see out the day’s play. The pair kept their cool under a large amount of pressure around the bat and between them saw out the draw, the home side finishing on 143-9 from their 48 overs.