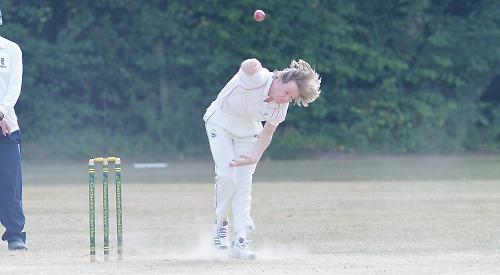 PREMIER Division league leaders CHECKENDON maintained their undefeated record this season as they ran out winners in their home friendly with local rivals WOODCOTE last Saturday.

The hosts won the toss and chose to field first in hot, dry conditions, a decision which was eventually vindicated.

Visiting skipper Paul Knox gave his side a sound start, striking a six and six fours in his 33. Once he was caught and bowled by Tony Breakspear Woodcote collapsed mainly against the pace of Amol Tyagi, who finished with 4-34.

Checkendon were also sharp in the field, taking seven catches as the visitors were dismissed for 95.

Openers John Acland-Hood and Ujwal Tikoo then put on 46 for the first wicket in reply.

Woodcote came back strongly as four wickets fell at the same score thanks to express 16-year-old debutant Patrick Heath and the probing seamers of experienced Ryan Van Heerden.

Sam Arrowsmith redressed the balance for Checkendon with a vital 15 before Shankar Sundaresh competed the task with three fours followed by a straight six to win the game.

Elsewhere in the division Parvesh Dabra’s six-wicket haul was not enough as GORING suffered a 101 defeat at WOODLEY.

Batting first the home side were bowled out for 243 with Dabra taking 6-28 and Toby Winterbottom 3-17.

In reply Goring were bowled out for 142 with Dabra top scoring with 41.

A number of Peppard Stoke Row players made starts, but with the exception of Josh Perkins (33) none could pass 20 as they were bowled out for 114. Captain Olly Nicholson made an early breakthrough as he removed Suneet Basra with the score on 8, but Fakhir Ali (59 not out) and Jay Deshmukh (39 not out) made light work of the target as Shinfield reached the required runs in 15 overs.

U15 Daniel Watts gave his father Andy the perfect birthday present as his coming-of-age innings led PEPPARD STOKE ROW 3rds to a six-wicket triumph at home to WEST READING 3rds in Division 2.

Playing in the same side as his father turned 48, the junior Watts made an outstanding 51 to steer the home side to a shock victory at Peppard Common against their second-placed rivals. West Reading won the toss and posted a competitive-looking 223-9 – possibly 30 runs under-par on another fine batting surface – as opener Ghalib Hussain (44) and Najam Raja (112 not out) led the charge for the visitors.

After securing a fast start, their total ultimately proved insufficient mainly due to the bowling of Matt Vines and Mick Chard (both 3-36), along with another excellent effort from U15 Archie Malcolm (2-26).

Hugh Asquith and Andy Watts gave Peppard Stoke Row a solid base, but when both departed the home side were 51-2.

It was at this point that 14-year-old Daniel Watts (51) and the more experienced James Hern (52) shared a key partnership of 101 to wrest the initiative back in favour of the home side.

Watts — who backed his effort up with an unbeaten 50 for the club’s U17 side the following morning — played shots all round the wicket including a number of cover drives straight from his father’s textbook, while Hern was also in form until both fell in quick succession to leave Peppard Stoke Row on 157-4.

Any alarm bells for the home side were removed as Vines (40 not out) and Rob Simmons (32 not out) came to the crease, with the duo adding an unbroken 68 to seal victory with 20 balls to spare.