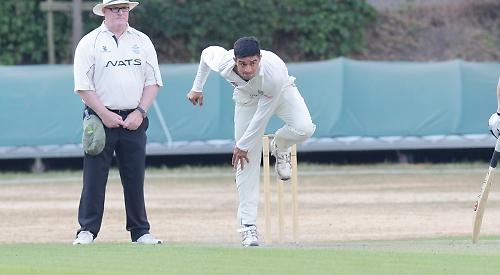 HENLEY ran away comfortable winners on Saturday after a commanding 10-wicket victory against THAME TOWN, who remain at the foot of the Home Counties Division 1 table.

Thanks to four wickets apiece for Tahir Afridi and Euan Woods, Henley openers Michael Roberts and Matt Rowe were only required to chase 73 for the win on a belting wicket, a feat completed in a little over 10 overs.

The result puts Henley third in the table and sets up a potentially title-defining game this weekend against confident leaders Aston Rowant.

After an extremely hot and dry month, evident in the colour and pace of the outfield, both teams were met by a well prepared wicket by Henley groundsman Charlie Jacobsen. Rock hard, with some live grass to facilitate pace and carry, there would certainly be something in it for both bat and ball and after winning the toss, Henley skipper Michael Roberts decided to take advantage of any early movement by opting to bowl first.

With Nugent and Afridi bowling quickly and accurately, the first breakthrough never looked far away and after nine balls, Afridi got one to find the edge of Russell’s bat to be caught by Roberts low down at second slip with just five on the board.

Thomas was the next man to go, who after an unorthodox 17 balls, left a Nugent delivery to be bowled for a duck. Overseas batsman Kanishka did little to quell the tide, nicking Afridi through to keeper Williams, before Henley’s spearhead accounted for Sutcliffe, caught by Nugent at third slip. Thame at this stage were 38-4, with Nugent and Afridi working well in tandem to make sure no headway was made by skipper Beard, who continued to watch wickets tumble from the other end.

Afridi quickly made it 38-5, nicking Mushtaq off to Williams for a duck, the Henley man now with four to his name after a fine spell of new ball bowling, ably supported by his team mates in the field.

The drinks break came and went and after a brief show of resistance, Jeffcock found himself walking back to the pavilion, hitting a ball straight back to spinner Woods, who then picked up Phippen with his very next delivery.

Bowling an aggressive fourth stump line and bowling a fraction slower than normal, Woods found the edge of Phippen’s bat to induce a remarkable one-handed catch by Nugent at slip. Despite missing out on the hat-trick, seamer Rishton bowled Jackson the following over for another duck before Woods quickly picked up his third and fourth of the innings — Jelfs nicking to Afridi at second slip and skipper Beard, the only Thame batter to hold firm, caught by Nugent to bring the innings to a close in the 25th over.

Lunch was taken, with Thame hoping for a momentum shift on the resumption of play. However the break did little to stop Henley in pursuit of their win, as the defending-champions looked to knock off the required 73 in quick time.

Both Roberts and Rowe were largely untroubled, despite a stroke of luck for the captain who nicked through the slips early on. Boundaries flowed from the outset, with Roberts accelerating against the seam before Rowe looked to be aggressive against the spin of Phippen. It didn’t take long for the 50 to come up and then with six to win, Roberts launched Mushtaq over the screens at the Remenham Hill end to finish the game in good time.

A strong performance and comfortable victory in the end for Henley, however they will know that sterner tests await around the corner.

Henley have a good opportunity to open the league wide open this coming weekend with a win at Aston Rowant, but skipper Roberts is more than aware of the threat posed by the current league leaders. Roberts said: “Today was a good boost to take into next week after a disappointing draw the previous weekend at Banbury.

“Aston Rowant are a really good side, with depth in all departments so it will be a good test of our title credentials for sure. They are certainly the form team and deserve to be top.”

In relation to his team’s season so far, Roberts added: “With only five wins to our name, it’s clear we have been a little patchy so far. But with the exception of Banbury, where we were far from poor, we have played a lot of good cricket since mid-June and showed skills reflective of the group’s potential.

“There’s a sense that we’re peaking at the right time and we’ll be fully focused on our skills and game plans come Saturday, which are certainly good enough to create the desired result. It’ll be a good game for sure.”