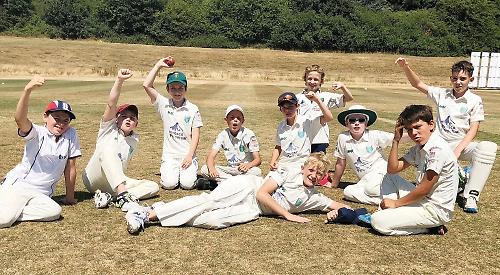 HENLEY U11s were celebrating this week after winning Division 1 of the Oxfordshire League.

This season Oxfordshire are not allowing the table toppers to progress to finals so there will be no U11 champion for the five table-topping sides.

Meanwhile the Henley U11 Cougars sit top of Division 1 in the Berkshire league after beating Hurst U11s in their final match of the season. Henley reached their highest number of runs this season as they posted a score of 185-2 with four players retiring.

Freddie Corbett, Oliver Saunders, Mark Colombi and Douglas Amlot all retired after hitting 23 fours between them at Harpsden.

In reply Hurst’s scoring was kept down against a Henley side that were a player short. Man-of-the-match Freddie Corbett, having taken a wicket in a previous over, took the ball in hand for his last over and took a further four wickets. Conor Quinn also chipped in with two wickets as Hurst closed in on 117-7. Henley now have a chance to progress to the end of season finals.

In Division 2 Henley Wildcats U11s were also crowned champions having won every match this season.