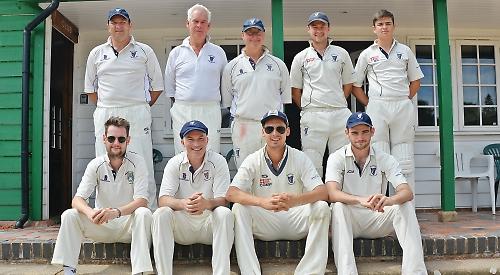 Harpsden won the toss and elected to bat first on a good batting wicket. The match started poorly for the home side as Matthew Stanley was caught in the slips for 4.

This brought Christian Whittaker to the crease, fresh from his heroics in the league the day before, who joined Adam Birkett. The pair started slowly but made sure they put away any bad balls. Once they both had their eye in, runs started to flow more freely with a 100 partnership coming in quick time.

Clever bowling by S Beardall removed Birkett which then sparked a collapse as five wickets fell for 20 runs leaving Harpsden 158-5 in the 28th over.

Whittaker seemed unfazed at what was going on at the other end and hit the ball to all parts of the grounds, with several maximums, finishing on 124, well supported by Shazad Gulfraz at the end of the innings. Harpsden finished on 239 off their 40 overs.

What followed can only be described as a masterclass in a batting run-chase by Charlie Beardall. However, before that Rid Birkett removed S Bearn with a good catch from Gulfraz at mid-on. Beardall, in at number three, watchful to start with, built his innings tremendously well pouncing on anything that was over-pitched or short of a length from the Harpsden bowlers. A 150-run partnership with S Bucknill put Harpsden on the back foot until Bucknill was bowled by Matthew Stanley.

The introduction of Stanley and some tight bowling by Whittaker pegged Turville back meaning that the visitors required nine an over for the last 10 for victory.

Charlie Beardall was unfazed and continued on his way, passing the 100 mark, and taking Turville home with eight balls to spare, finishing on an unbeaten 120.