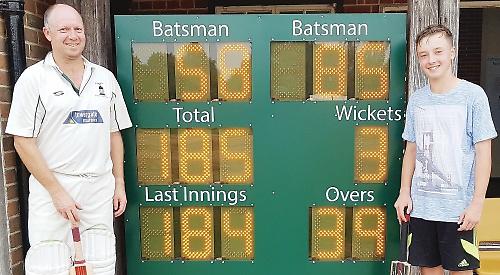 HOSTS GORING were invited to bat first on a good pitch by Premier Division table-topping CHECK-ENDON last Saturday and, after an early setback when Ollie Carrier was run out by a deflection, established a strong position.

Parvesh Dabra struck 74 at a run a ball with 12 fours and shared a stand of 107 with Andy Benning.

Left-arm spinner Ninad Rahatekar led the comeback with a 12-over spell of 4-50 and two further run outs enabled Checkendon to end the innings at 203.

Consistent batting by the visitors gave them control of their reply with Ashish Talreja hitting a perfectly judged half century.

PEPPARD STOKE ROW 2nds beat a strong TWYFORD AND RUSCOMBE side by seven wickets in Division 1.

Twyford raced to 85-1 after 15 overs courtesy of some big hitting by Stuart Barrable, who made 63 off 43 balls. Once he fell to a caught and bowled by Roy Hayden a mini-collapse ensued as the visitors lost five wickets for 12 runs.

Twyford skipper Shiva Nagam rallied his side with a fighting 55 off 47 balls but he was well-held at long off by Dan Watts, and with Peppard Stoke Row juniors Ed Atkinson, Jem McAllister and Dan Watts fielding well on a hard outfield, once Matt Ravden joined the attack Twyford were soon bowled out for 184 with five overs remaining.

Roy Hayden claimed 5-32 off 12 overs while Ashley Hayden took two wickets in 11 overs of off spin for only 40 runs.

In their reply Peppard Stoke Row lost two early wickets as Twyford opted to take the old ball and at 13-2 the game was delicately poised.

Andy Watts (58 not out) and 14-year-old Dan Watts (85) calmly put together a 150-run partnership to secure a comprehensive win with 10 overs to spare. Dan Watts was eventually out chasing his maiden ton, shortly after he had hit a straight six on to the Peppard pavilion roof.

An outstanding eight-wicket partnership between Pradeep Kumar (62 not out) and skipper Rob Dyer (55 not out) ushered PEPPARD STOKE ROW 3rds to a 72-run win at KNOWL HILL in Division 2.