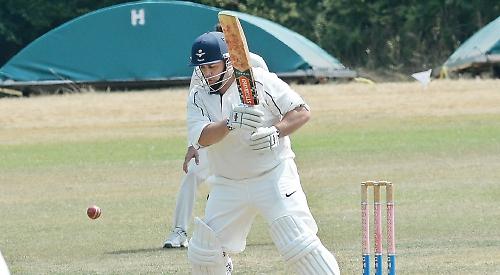 Hurley lost the toss and chased leather for three-and-a-half hours as Holmer Green plundered 253 in 45 overs. Hurley had little luck as edges and shots fell into spaces. Naeem Akhtar returned maximum effort in the stifling heat while the hosts were 51-2 after 14 overs, but a third wicket stand of 143 broke the visitors.

Akhtar was watchful for four balls but with fielders crowding the bat he went aerial and fell at mid-off in the opening Jake Gumb over.

After three overs Hurley were 9-3 with Ridgeway lolloping a full toss and Ian Dawkins stumped. Henry Graham fell first ball but Ollie Dawkins drove his first two balls to the boundary. Hurley never recovered and were shot out for 46 inside 12 overs and 45 minutes.

The visitors won the toss and put Harpsden into bat first. Ed Andrews and Harpsden debutant John Griffiths provided a good foundation for the hosts with an opening partnership of 84. The partnership was only broken when Andrews missed a straight one but greater problems were to follow as Adam Hurst was caught behind first ball.

Skipper for the day Sasha Burgess and Griffiths managed to push the score along to 110 before Griffiths was trapped in front by H Patel after a well-constructed 57.

Carl Pohl followed immediately afterwards, again trapped in front by H Patel. At 110-4 Harpsden were wobbling and heading for a sub par score and the prospects dimmed further as Burgess and then Sam Imlay fell in quick succession with the score on 130.

Will Bevan and Ian Brown tried to consolidate before Bevan was caught by a juggling effort at slip and at 150-7 Harpsden needed something special to get to anything near respectability. James Moore showed great application in keeping a rampant Ian Brown company. Brown scored a match-changing 55 and the pair put on 88 for the eighth wicket before Brown was also trapped in front, this time by N Patel. Moore was the last to go for a patient 14 leaving Knotty Green 243 to win in 43 overs.

Harpsden took the old ball and Rod Birkett clean bowled A Patel in the third over before skipper Tommy Patel and Searing pushed the score along comfortably to 40-1 until the match turned in a single Shazad Gulfraz over. Searing was clean bowled by a ball that clipped the top of off stump, four balls later N Patel tried to sweep Gulfraz and was caught by Burgess before Pandya drilled Gulfraz’s worst ball of the match — a long hop — straight to Hurst at cover who took a good catch. In the space of an over 40-1 had become 40-4.

Wicket-keeper Allison and T Patel again tried to consolidate but it wasn’t long before Allison also tried to sweep the leg spinner Gulfraz and was well caught by Burgess who held on to his second skyer. Desai was then caught by John Griffiths who dived full length at short cover to a well struck drive that only got inches off the floor and he caught it in his left hand at full stretch.

Tommy Patel’s vigil then came to an end as he was the third batsman to fall into the trap of trying to sweep Gulfraz and then Panchmatiya was Gulfraz’s seventh victim when he hit one to Hurst at cover.

Shazad Gulfraz bowled his allowable 14 overs straight through and finished with 7-44, his best figures for Harpsden.

H Patel and V Patel put up significant resistance and with fewer than seven overs to go Harpsden were fearing that all the good work that had gone before would be wasted. However, V Patel was trapped in front by some late movement from Bevan and Harpsden ran out 145 run winners to earn the villagers their third consecutive 30-point haul.

HURLEY 2nds had the better of their Division 2 high-scoring draw at league leaders LITTLEWICK GREEN 2nds.

With a reshuffled team, including three seam bowlers who had not played together for Hurley before, Clive Williams chose to bat when he won the toss. That shuffle had also given Hurley three openers, so Pat Hinnell opened with Williams and Abdullah Ali dropped to number five.

The opening partnership lasted just one ball as Channi Sethi’s loosener landed short and barely leaving the ground as it crept under Williams’s bat. Yasir Gul and Matthew Williams contributed one run between them, but kept Hinnell company as he ran busily and played some good pulls and cuts when the bowlers dropped short.

At 29-3 Abdullah called on his full repertoire of premeditated blocks to see that it got no worse. Hinnell kept up the scoring and the pair added 57 before Hinnell got another from Sethi and departed lbw. That brought in Greg Double, who played with confidence and aggression, while Abdullah brought out some of his big shots as the bowlers faded in the sun. Double made a personal-best 78 out of a stand of 120, before Fred Herbert did him for lack of pace.

With everything that beat the infield going for four, even 206 didn’t seem like a winning total as Abdullah stepped up the pace. Abdul Jabbar tried a little too hard to match him and lost his timing, but found it again and got the score into declaration territory.

Abdullah was eventually stumped and Fayyaz Kayani helped Hurley into the 280s. Jabbar was well caught on the boundary by Chris Leakey but Williams called the players in an over early at 295-7.

In reply Littlewick Green never threatened to overtake Hurley. Ajmal Ali bowled Sethi with one that straightened through the gate but Simon Fuller joined Bill Green and the pair added 88 for the second wicket.

Fuller survived an lbw decision to Ajmal without scoring and each batsman managed to edge the hostile Kayani just high enough over the slips, but Fuller in particular looked more solid as the innings wore on, and made Hassan Gul’s six-over spell look less tidy than it really was.

Playing the joker again got Hurley a vital wicket, this time a smart catch behind by Double as Green tried to be too delicate with Dave Walton. Chris Leakey and Mike Duxbury had no answer to Kayani’s pace, but David Herron stuck with Fuller to add 47 for the fifth wicket, before Jabbar changed ends to remove his middle stump.

Hurley were now running out of overs, and Littlewick Green’s only remaining objective was 200 for the final batting point. This they achieved, but John Lucey was disappointed to gift Hurley his wicket — and a third bowling point — with a swish at Walton that lobbed easily to Matthew Williams at square leg. Fuller reached his hundred shortly before hands were shaken on an enjoyable draw — although it might have been a different story in a 100-over match.