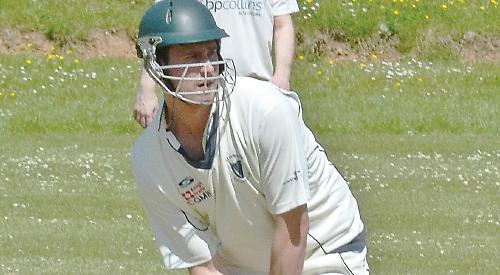 Skipper Christian Whittaker lost the toss and the visiting side were asked to field on a sweltering afternoon at the Reading University ground.

Arshad and Javed came to the crease and the pair set about rebuilding the innings, mixing a solid defence with some brutal punishment of anything loose that was dished up by the Harpsden bowlers.

Paice found a double breakthrough, having Javed caught by Khaliq for 23 and then dismissing Zaman shortly after. Arshad began to play more expansively but the home team’s progress was halted by some good work by Ward behind the stumps as he saw his partner Wahab stumped off Paice for 5.

Mahmood came into bat and the pair began to build a solid partnership, rotating the strike well and accelerating the score throughout the middle overs. This partnership was brought to an end as Franklin had Mahmood caught for a well-made 36 and Khalid joined Arshad in the middle. The number nine opened his shoulders immediately and struck several large sixes straight from the off. The home side looked to be well on top before Whittaker reintroduced himself, having the dangermen Khalid (49) and then Arshad (90) both caught at long on by Toby Stevens. West Reading closed out their overs on an imposing 243-9.

Harpsden began their innings in a steady fashion. Returning opener Watson and partner Birkett played the old ball with great patience and solid technique. The pair brought up the 50 partnership before West Reading were forced to take the new ball in an effort to build some momentum for the home side. The tactic worked as Rasaq had Birkett caught and bowled for 33. His partner Watson followed shortly after, falling victim to a spectacular slip catch by Nasim off the bowling of Khalid.

Hancock was joined by Whittaker at the crease and the pair began to set about blunting the new ball attack. Hancock was caught behind and, when Franklin followed shortly after, Harpsden looked to be struggling in the face of some consistent bowling from the opposition.

Heath joined his skipper at the crease and began to play the anchor role in the partnership, showcasing a solid defence and putting away the occasional bad ball.

At the other end Whittaker was playing with great fluency, working the ball around nicely and dispatching any loose deliveries with dismissive power. The pair brought Harpsden back into contention before Heath was run out for 25.

Ward arrived at the crease and assisted his skipper with a useful cameo. The diminutive wicket keeper played a number of well-timed strokes on the leg side before being caught off the bowling of Khalid for 14. Stevens arrived at the wicket with the pressure mounting and supported his skipper well, rotating the strike and climbing into a few loose balls when the opportunity arose. Whittaker (98 not out) began to take the game away from the home side, showing good composure and technique to punish anything wide or short of a length.

Following the dismissal of Stevens (17) the skipper was joined at the crease by Dawson, the opening bowler showing his experience by playing calmly in defence, before stroking one away through the covers to cap off a memorable win and bring a vital 30 points back to Harpsden.

PEPPARD STOKE ROW eked out a draw at table-topping CHALFONT ST GILES with Josh Perkins playing a resolute innings to secure a share of the spoils.

The visitors won the toss and chose to bowl on a green strip which played particularly well. Chalfont openers Chris Cross (59) and Alex Hardy shared 107 for the opening wicket until the latter was caught at first slip by Richard Ashton off the bowling of Sam Fooks.

The same duo accounted for Simon Lancaster with another one-handed snaffle from Ashton in the cordon, and Dion Sampson had the dangerous Chris Baumohl caught at slip to put the visitors back in the game with the hosts 110-3.

A 42-run fourth-wicket stand between Hardy (66) and Dan Heaney was ended by Max Baker-Smith, who bowled both to leave Chalfont 159-5.

James Plested blasted 25 before giving Ashton his fourth catch off the bowling of Will Atkinson, but some useful lower-order hitting from Nick Lancaster (49 not out) and Alex Heaney (27), allowed the home side to reach 298-8 from their 52 overs. Fooks (3-35) and Baker-Smith (2-45) were the pick of the Peppard Stoke Row attack.

The visitors’ reply started in disastrous fashion as Alfie Clifton was given out lbw first ball, but Don Townsin and Max Baker-Smith (53) put on 89 for the second wicket until the latter’s outstanding knock was ended when he hit a Paul Plested long hop straight to square leg.

Townsin (45) was bowled by Plested to reduce Peppard Stoke Row to 124-3 and with Scott Harris chopping on to the sizeable seamer, the away side were 142-4.

Senthil Muniyasamy (46) was in belligerent mood till he inside edged the returning leg spin of Cross into his stumps, and when Ashton skied one to mid off, the writing was on the wall for Peppard Stoke Row at 176-6.

However, the lower order, marshalled by Perkins (25 not out), remained resolute and Peppard Stoke Row ended their innings on 216-9.