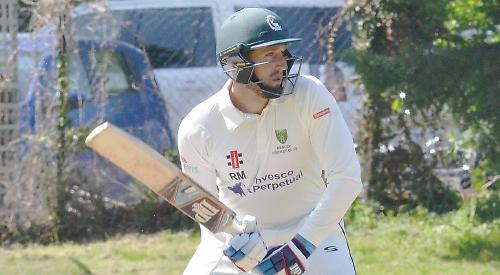 BERKSHIRE made it three wins out of three in the Western Division by winning their top-of-the-table clash with SHROPSHIRE at Finchampstead.

The defending champions cruised home by an emphatic 322 runs after bowling out their visitors for just 93 in their second innings.

Berkshire have opened up a 16-point gap over Shropshire at the halfway stage of the championship season, whilst extending their remarkable unbeaten run to 21 games in the three-day competition.

It was a milestone in the career of spinner Chris Peploe, who took eight wickets (3-88 and 5-35) in the match to pass 200 wickets in the Minor Counties Championship, having made his debut for the county in 2009.

Berkshire dominated the game from start to finish, and that was despite an outstanding innings of 166 from Alexei Kervezee in Shropshire’s first innings.

They led by 112 runs on the first innings and another solid batting display second time around saw them declare on 303-8 to leave the visitors an improbable target of 416.

When they returned to the crease, Shropshire batted with the utmost caution and failed to take a run off spinner Euan Woods until his seventh over and that was followed by another five maidens.

It took Shropshire 35 overs to pass 50, by which time they had lost five wickets, including that of Kervezee, who scored three runs off the first ball before being dismissed to the first ball he faced from Peploe.

Peploe went on to claim four more victims to finish with figures of 18-9-35-5 before Ali Raja cleaned up the tailenders with 3-6 off 3.1 overs to end Shropshire’s innings on just 93.

In the end, it was the spinners who took the glory, but Berkshire also owed much to the batsmen who had earlier played superbly to lay the foundations for another outstanding performance.

Richard Morris took the home batting honours with 116 in the first innings, with good support coming from Dan Lincoln with 66 and Andy Rishton 55. In the second knock, there were useful contributions throughout the order, headed by Hussain with 61, Woods 55, Richard Morris 39 and Stewart Davison 32.

The fielding was again of the highest order, so another thoroughly good performance by the whole team who are going to take a great deal of stopping as they bid to retain the title.

Berkshire gave a debut to 16-year-old Reading Blue Coat pupil Toby Greatwood and it’s a game he won’t forget for some time.

Showing maturity beyond his years, the Wargrave paceman scored 22 not out in the first innings, but on Monday he suffered a painful blow on his right instep when bowling, with Gurgit Sandhu hammering a ball straight back in his direction and wasn’t able to bowl again.

The substitute fielder on Tuesday was Josh Lincoln, so joining his brother and Finchampstead team-mate Dan. With the two Morrises also involved, it meant Berkshire had two sets of siblings playing at the same time.

Berkshire’s next fixture is against Devon at Falkland CC on August 5 to 7.