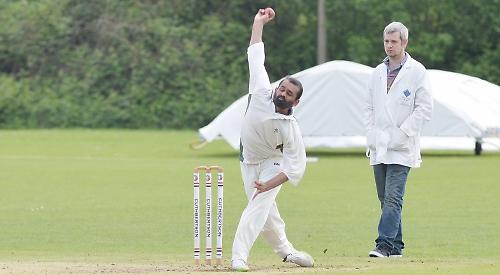 Hamid Riaz then joined Ollie Clayson and the pair put on 138 before Clayson was dismissed, bowled Sean Taylor, caught Oldershaw for 70. Shalika Karuannayae joined Riaz and put on a further 53 runs before Riaz was bowled by Wheeler, caught Taylor, for 82, to leave the visitors on 225-4.

Five wickets fell for 70 runs with only Mudassar Hussain reaching double figures as Boyne Hill ended their 52 overs on 295-9. Wheeler ended the innings with an impressive haul of 6-86 for the hosts.

In reply Henley found scoring runs hard to come by and appeared to be in trouble of losing the match when they were on 100-7. However, number seven batsman Charlie Homewood put on a match-saving 97 not out as he put on a 117 partnership with Nick Johnson to see his side home on 217-7 to claim a share of the spoils.

KIDMORE END held on for a draw in their Division 2A clash at CHESHAM 2nds.

The home side won the toss and elected to bat first. Chesham batted well as young opening bowlers Fountain and Jones bowled patiently without much assistance from the wicket. Jones struck first with a sharply rising ball that found the edge and was gobbled up by Zac Leonard.

As the ball lost its hardness batting became much easier. The spinners tried to control the rate but Hughes d’Aeth and Free batted well. Crawford bowled Hughes d’Aeth for 30. This brought Bamber to the wicket and the pair attacked as a score of 300 before 52 overs seemed likely until Ashby pulled off a freak run out of the non-striking batsman, Free (45), by deflecting the struck ball on to the stumps behind him.

This slowed the scoring a little but Swain was also determined to keep attacking. Frost entered the attack, bowling spin for the first time in the league. Despite being brutalised in one over by Bamber, who struck three sixes in one over, Frost managed to pick up three wickets, one caught by Ashby and two batsmen bowled.

Crawford also took another wicket caught by Tom Bodeker. The Chesham middle order batted well, Bamber was out for 79, with four sixes while keeper Turner scored 42 not out as the hosts finished on 302-7 from 52 overs.

Kidmore only had 48 overs to chase the runs down and were at the disadvantage of starting against a soft old ball which would not travel to the boundary as quick as the new ball.

Wickets fell early as Kidmore were on 29-2 but a fine partnership between Leonard and Crawford used up time, overs and runs. Together they put on 46 and took the score up to 89 before Crawford was dismissed thanks to a fine diving one-handed catch for 45. Leonard fell shortly afterwards and there was a collapse as Kidmore lost four wickets for two runs to leave the score on 91-6.

Debutant left-hander Dan Simmons clipped and drove his way to 28 valuable runs in a good partnership with Tom Bodeker who pulled and swept his way to a similar score of 32 from just 22 balls. Both batsmen were able to capitalise on the attacking fields which meant they either blocked the ball or struck a boundary. Their partnership of 51 was brought to an end when Bodeker was caught.

When Simmons was finally out there was still time in the game for Chesham to win the match but unfortunately for them they had to go through experienced batsmen Frost and Sheldon. This pair batted the last 45 minutes of the match with no intention of handing Chesham the victory.

Frost still played some shots, square driving and cutting a number of boundaries and helped Sheldon take the score from 144 to 195 in the remaining 15 overs of the match. Frost finished with 28 not out from 47 balls striking six fours in the process.

Sheldon’s innings was one of the most infuriating displays of batting many of the Chesham players had witnessed as he finished with a strike rate of 8.93 (runs/100 balls) as he scored five runs from 56 balls.

In the end Chesham used six bowlers but Frost and Sheldon would not budge and the game ended in a draw.

WARGRAVE ran out four wicket winners at THATCHAM TOWN in Division 2B.

Having won the toss and electing to bat first the hosts were bowled out for 176 with Neal Robinson taking 5-38. In reply Wargrave put on 177-6 to win the match with Imran Malik top scoring with 56 while Kirk Graham ended on 46 not out.

In Division 4A relegation-threatened HENLEY 3rds suffered a five-wicket defeat at WHITE WALTHAM. Batting first having won the toss Henley were bowled out for 172 with Johnny Connell top scoring with 74. In reply White Waltham eased to 173-5.

The visitors, having won the toss and electing to bat first, were bowled out for 142. M Smith ripped through the visitors innings to end with figures of 8-31. In reply S Konidena hit 70 and JJ Harris 58 as Wargrave reached their target of 146-1 in just under 22 overs.

In Division 7A KIDMORE END 2nds recorded a hard-fought win against WOKINGHAM 4ths at Gallowstree Common.

Wokingham won the toss and inserted the home side as they looked to exploit helpful conditions following the previous night’s rain.

Kidmore’s openers Chris Pigden and Mark New battled their way against Jamie Cable and Matt Macdonald’s opening spell and it took a change of bowling to remove New who was adjudged lbw for 20.

Pigden was joined by Cameron Livingstone-Smith until another lbw decision saw Livingstone Smith dismissed. The Kidmore innings stuttered along until Pigden and Stefan Gordon put together a 56-run partnership until Pigden was dismissed for 46.

Kidmore lost another wicket and were in trouble at 139-5. However, Gordon and Luke Gray then combined to add a further 25 before Gordon was dismissed. A 77-run partnership between Will Patey and Gray ensured that Kidmore were pushed along to a respectable total and in the process both made 39 and 44 respectively. The Kidmore tail wagged slightly leaving the home side all out for 249 on their allotted 52 overs.

The hosts took a further wicket courtesy of Ul Haq. Kidmore then made further inroads and had Wokingham in trouble at 94-5.

Wokingham’s innings was dominated by an 85-run partnership between Manas Mathapati and Mo Ghafoor which meant the visitors were still in with a chance. However, Azhar Udeen returned to bowl both within two overs and despite a late flurry from Jamie Cable the Wokingham tail were unable to keep Udeen at bay as he took the remaining wickets to return figures of 7-80.

Visitors WARGRAVE 3rds lost by three wickets at BRADFIELD 2nds in Division 8A.

Having lost the toss and being put into bat first the visitors put on 196-8 with Scott Walker top scoring with 49 not out while Ken Clark hit a useful 39. In reply Bradfield put on 199-7 to win the match. Despite the result Wargrave remain in second place in the table.

In Division 9A hosts KIDMORE END 3rds lost out to visitors FINCHAMPSTEAD 5ths by nine runs.

Batting first Finchampstead ended their overs on 193-7 with Todd Butler taking 4-35. In reply Callum Driscoll hit 75 and Ankur Raina 64 as Kidmore ended on 184-8.