Thrilling draw leaves side with plenty of work to do 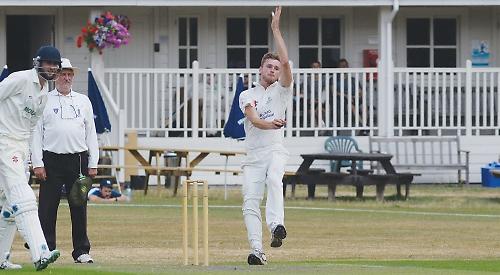 A FINE spell of bowling from Tom Nugent helped HENLEY salvage a draw from the jaws of defeat in an enthralling contest at table-topping ASTON ROWANT.

Having dismissed the visitors for 165 in their batting innings, Aston Rowant looked likely victors with their score at one stage on 113-2 in reply. However some masterful bowling from Nugent (5-42), complemented with useful spells from Euan Woods and Euan Brock, ensured it was Henley who walked away with a winning draw, keeping their hopes of a title defence alive.

With Aston Rowant holding a good lead over both Henley (third) and Slough (second) in Division 1 of the Home Counties Premier League, last Saturday’s fixture promised to be a competitive affair, with both sides aware that victory would significantly change the complexion of the current standings.

It was no surprise when, having won the toss, Rowant skipper Josh Smith chose to bowl, allowing his side to control the game in the second half. His decision appeared more than justified early on too, with Morrick quickly nicking off Rowe and Woods to leave the score on 6-2 — the latter unfortunate having been caught down the leg-side thanks to the faintest of edges.

Despite the poor start Roberts and Morris worked hard against the new ball to rebuild the Henley innings, playing in a circumspect fashion but also with intent when scoring opportunities arose.

With Morrick bowing metronomically from one end, both players stayed aggressive against bowling changes from the other end, allowing the scoreboard to tick over.

Not long after drinks Morrick struck again, this time bowling skipper Roberts for 44, with the batsman offering no stroke and leaving the score on 88-3. From this point onwards, with spinner Moriarty beginning to turn the screw with Morrick at the other end, Henley’s innings never quite got going again despite Morris batting well for his 64.

Rishton came and went, hitting a catch straight back to Moriarty, who then dismissed Williams, caught at mid-off. Barnes briefly paired up with Morris, however the latter was soon dismissed, given out caught behind off the bowling of Morrick.

Barnes continued to hold the innings together as the remaining recognised batsmen fell around him – Brock dismissed by Moriarty, Nugent caught at midwicket off Morrick and Afridi falling to Muttitt caught at cover, all disappointingly soft dismissals. When number 11 Gurveer Singh was bowled by Muttitt, Henley had amassed just 165, with Barnes left unbeaten on 29 not out.

Henley required a quick start if they were to salvage something from the game, which seemed to be for the taking as the wicket continued to get better to bat on.

Nugent struck early to trap Reid lbw before Afridi accounted for Ferreira who was caught at slip by Rowe. Despite being 15-2 at this stage, Rowant, like Henley earlier, rebuilt well as both Condon and Smith played nicely to take the hosts past the 100 mark before tea.

As in any sport, it has to be expected that defending champions will respond to adversity and show a higher level of fight when it is needed most. In Henley’s case this came in the form of Nugent. After tea, Henley’s vice-captain charged in with aggression and accuracy, combing well with spinners Woods and Brock to create pressure, chances and wickets aplenty.

When Condon was run out for a well-compiled 48, Rowant’s batters fell in a heap. Brock had Watling stumped, before Nugent ripped through skipper Smith, Morrick, Pendered and Bethell to leave the home side on 146-8. Despite coming close on a few occasions to taking the final two wickets, even with the reintroduction of Afridi, Rowant duo Moriarty and Muttitt held on for the draw as the innings ended on 155-8 off 61 overs.

The result showed Henley’s fight on a day where their batting skills let them down, falling 60 short of a match-winning total. Kudos must go to Henley’s bowling attack which showed skill and resilience in abundance, led brilliantly by Nugent.

From the sidelines it appeared Rowant were more interested in holding on to and protecting what lead they had, as opposed to going for the win and extending their lead to what would have almost certainly been an unassailable margin.

Whether this was the right or wrong move, only time will tell. Regardless, captain Roberts was very focused on what should be an exciting run-in over next six weeks. Roberts said: “From where we were, a draw is a good result but ultimately, not the one we came here for.

“We have quite a bit of work to do there’s no doubt, but the group is in a great spot and we’re excited for the challenges ahead. Regardless of what happens, we’re certainly not going to leave anything to doubt.”