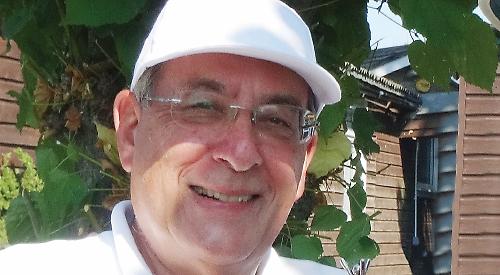 Goldring timed his performance peak well during the three-day event, which attracts the country’s best over-60s players to the Sussex County Club at Southwick near Brighton.

Goldring managed to get through the group stage which was played over the first two days but not without a couple of unexpected losses to lower ranked players, which meant he qualified for the last eight knock-out with a tough position in the draw. His quarter-final best-of-three match was against Liz Farrow from the host club who came back to win their second game to leave the tie standing at one game each at the end of the second day.

Goldring won the decider the following morning and the match 7-3, 4-7, 7-5 to set up a semi-final against the higher ranked and former winner New Zealander Nelson Morrow.

Goldring produced some of his best play this season to beat the experienced Morrow with ease in the first game 7-2 and then with rather more of a challenge in the second 7-6.

fIn the final Goldring came up against High Wycombe’s Ian Shore, a regular visitor to Phyllis Court thanks to his reciprocal membership of the RAF Club.

The match replicated Goldring’s semi-final with a comfortable 7-3 victory in the first game and a closer 7-5 result in the second, which the Henley man finished in style with a long-range score with all the other balls closer to the hoop.

Goldring is the third Phyllis Court player to win this title after Terje Johansen won it in 2011 and Carole Jackson also got her name on the trophy in 2013, a couple of years before she joined the club.

The national inter-club semi-final between Phyllis Court and Dulwich was postponed last Sunday due to the wet weather.