All rounder hits quick fire ton as leaders march on 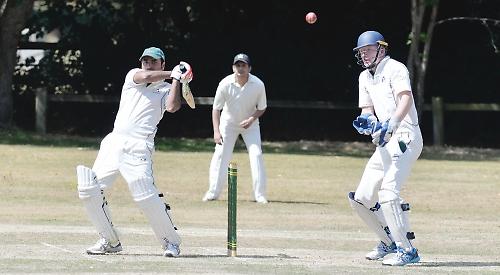 Having lost the toss the hosts were put into bat first on a fair pitch and were struggling at 44-4 following a farcical run out.

This set the state for a thrilling performance from cavalier all-rounder Amal Tyagi who proceeded to strike 103 not out off just 69 balls with four sixes and 11 fours.

A competitive total of 188 in 32.4 overs proved too much for the visitors once opening bowler Tony Breakspear had dismissed the first five in the order for 32 in his 11 overs.

Checkendon did themselves no favours by dropping a number of catches in addition to the nine they did take in bowling out Mortimer West End for a mere 127 in 42 overs.

Both sides were affected by the unaccustomed strong breeze though skipper Nick Kingston and Aquib Zaheer both batted well for the visitors.

GORING came away with a winning draw at FARLEY HILL as the bottom two sides in the division faced off.

Batting first Goring were put on 252-8 with opener Chris Winterbottom top scoring with 66 while Ollie Carrier hit 39, Nikhil Kulkami 37 not out and Max McGee 31.

In reply Farley Hill held on at 210-9 to claim the draw with George Taylor’s 3-29 the pick of the bowling.

Elsewhere in the division WOODCOTE’S losing draw at home to BERKSHIRE COUNTY SPORTS might have been a different story but for five dropped catches as the visitors reached an almost unassailable total in their 45 overs.

All the Woodcote bowlers bowled well enough, but with Berkshire County Sports plundering 89 for the first wicket, it was always going to be an uphill struggle.

With a realistic aim of achieving a draw, the Woodcote batsmen stuck to their task and made useful runs. A partnership of 79 between Jonny Clark, who reached his half-century, and Mike Higley, playing his first Berkshire League match for some years, formed the cornerstone of the innings, and in the end Woodcote achieved a comfortable draw, with the loss of six wickets.

An unbeaten 71 from Brett Everett and another five-wicket haul from the league’s all-time top wicket-taker Roy Hayden helped PEPPARD STOKE ROW 2nds secure a three-wicket win at EARLEY which lifts them to mid-table safety in Division 1.

Will Atkinson removed the dangerous Gary Shacklady early on – caught by his younger brother Ed – but Rob Casey and Vinod Aduri took the score to 84 until Hayden dismissed the latter.

Casey was then dismissed by Josh Perkins (2-34) as Earley were bowled out for 185, Ian Jackson also taking 2-24 as Hayden took 5-33 from seven overs to increase his league dismissals to 942.

Peppard Stoke Row lost Nick Sedgwick early before a useful partnership between skipper Riaan Ackerman (24) and Ed Atkinson steadied the ship, but it was the brilliance of Everett and a crucial 36 from Perkins – who was dismissed via Mankad, the bowler flicking the bails in his delivery stride – which helped set up the victory.

Hayden showed his experience at the death and Peppard Stoke Row were able to clamber over the line with just two balls to spare.

PEPPARD STOKE ROW 3rds secured a winning draw at home to a strong visiting WARFIELD side in their Division 2 clash.

Having been asked to bat, Peppard Stoke Row openers Will Wakelem and Olly Nicholson were solid against the accurate bowling of Atherton and Gander and patiently picked off any boundaries in their opening stand of 44 off 11 overs.

Once Warfield opted to take the pace off the ball the run rate dropped for 25 overs as Peppard Stoke Row elected to preserve wickets, with James Hern (26) and Owen Ravden (19) playing watchfully.

With 12 overs to go the Lambert brothers Dave and Mark upped the pace, both scoring 39 apiece in rapid time. Good running between the wickets by Pradeep Kumar and Rob Dyer also boosted the run rate, with Peppard Stoke Row scoring 90 in the final nine overs. The home side were eventually able to post 224-8 off their 45 over allocation.

In their reply Warfield played out an accurate spell of seam bowling from Owen Simmons, with their 64-run opening stand only being broken by an accurate throw from Will Wakelem to run out Atherton for 34.

At 125-1 the visitors were in a dominant position and it took the introduction of Owen Ravden to peg them back as they lost three wickets for eight runs. When his father Matt bowled the other Warfield opener Curran through the gate for a patient 54 off 83 balls it was Will Wakelem who again provided the key breakthrough, taking a low catch at cover to dismiss the dangerous Gander for a cameo 23 of 13 balls.

Warfield then opted for the draw, finishing on 195-5 off their 45 overs.